Man's mission to help homeless in LA centered on simple solution: Be kind, but do something

While the debate on how to reduce the number of people experiencing homelessness in California continues, one man is stepping in.
KABC
By Phillip Palmer 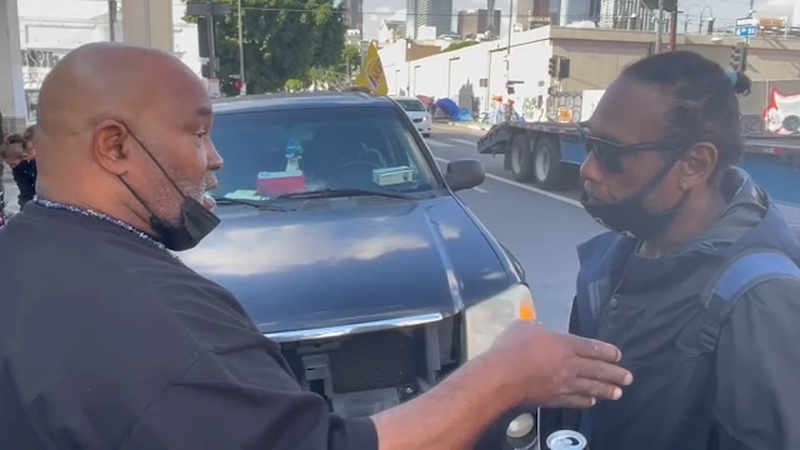 Man talks mission to help homeless in LA: Be kind, but do something

While the debate on how to reduce that number continues, one man is on a mission to make a difference himself.

"My passion was, you know, get them clothes, shoes, hygiene package, water ... All types of races, I was just being a blessing to them," said Luther Keith Jr. of Central Urban Mission during an interview with Eyewitness News.

Keith's mission is actually his crusade to help the less fortunate. His efforts formally began in 1999 by collecting clothes with the help of his father's church - Central Baptist in Inglewood - and gathering food from local food banks.

But he says he's wanted to help the less fortunate since he was a child.

He personally delivers the items to homeless communities across Los Angeles County, even on the streets of Skid Row in the shadows of more established missions.

He's not only providing food and clothing, through his security work at SoFi Stadium, Central Urban Mission has also helped nearly two dozen people get jobs at SoFi Stadium.

His passion is only limited by the hours in a day but certainly not the time of day even as he knows the danger that can come with his efforts in downtown L.A.

The Los Angeles City Council has approved nearly $2 million to fund homeless outreach teams and other positions related to its street engagement strategy designed to accompany enforcement of the city's new anti-camping law.

His connections through the community can often help him find transitional housing, but that roof comes with a stern warning from a gentle man.

Keith's model might not seem possible for everyone, but the Central Urban Mission is actually the simplest of solutions: Be kind to others, but do something.

"You see them out there every day all over the world. Be a blessing to them," said Keith. "Gather some stuff, go out there and give it to them. Somebody's throwing away food ... all this food thrown away... somebody's hungry out there. Don't throw the food away, somebody's hungry. Take it to them ... give them something to eat."