Investigation underway after Lyft driver says he was beaten, robbed by 2 passengers in Rialto 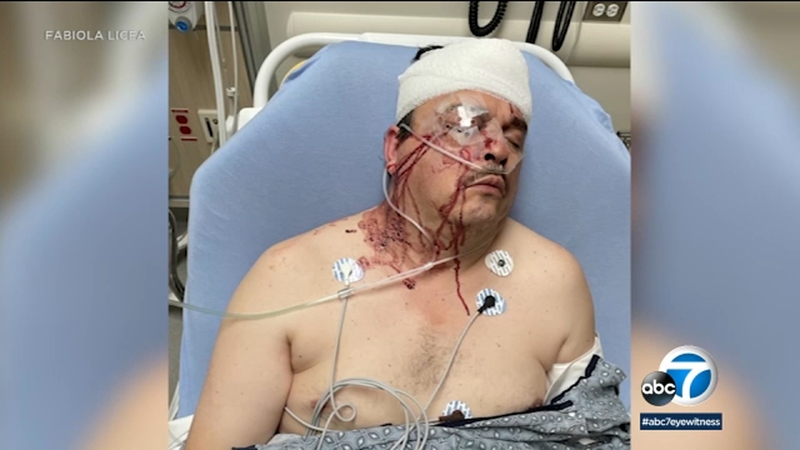 RIALTO, Calif. (KABC) -- An investigation is underway after a Lyft driver claims he was brutally beaten and robbed by two passengers he picked up in San Bernardino.

Alberto Avila, 55, nearly lost his right eye due to the beating that took place Saturday night near the Rialto Metrolink station, according to his family.

"When they entered the vehicle, they began fighting with each other. As he is heading out and getting ready to drop them off...they start screaming at him, saying where is going and what is he doing," said his daughter, Fabiola Licea.

Avila's daughter says when the couple turned their fight on him, he stopped the car and asked them to leave the vehicle. She says he then got out of the car and took the couple's luggage out of the trunk.

Leaving him bloody and beaten, the couple took off with Avila's phone.

The San Bernardino Police Department is investigating the alleged incident as Avila recovers at home. Anyone with information is urged to contact the department.

Avila says he's worked for Lyft for six years and only asks that they help him.

In a statement to Eyewitness News, the company said "Safety is fundamental to Lyft. The behavior is appalling, and we have been in touch with the driver to offer our support. We have permanently removed the rider from the Lyft platform and stand ready to assist law enforcement with their investigation."

Avila's children have set up a GoFundMe page for their father to help pay the bills while he recovers. For now, his future as a Lyft driver is uncertain.

"I'm not sure I will go back. This has traumatized me," he said in Spanish.

Correction: A previous version of this article erroneously reported the driver was removed from the Lyft platform. The rideshare company removed the rider.