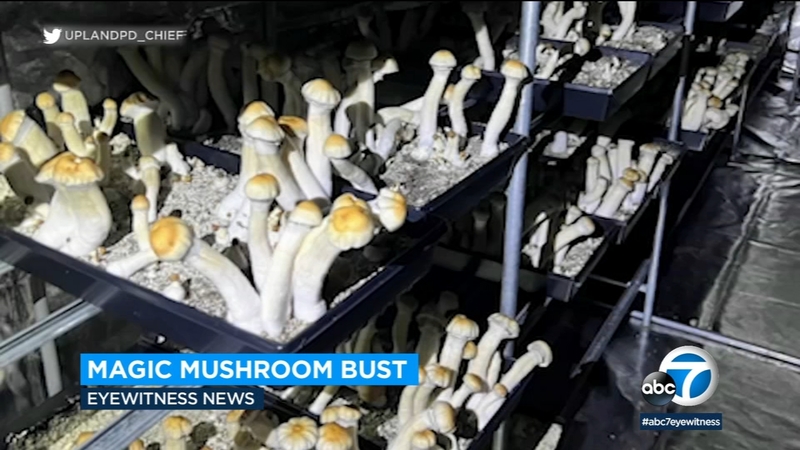 UPLAND, Calif. (KABC) -- Police stumbled upon a massive "magic mushroom" operation and seized hundreds of the illegal plants after responding to a burglary call in Upland.

Authorities confiscated 1,074 trays of growing psychedelic mushrooms and another 92.5 pounds of dry mushrooms at the facility.

Upland police made the find while responding to a commercial burglary call near Sultana Avenue and 8th Street recently.

After making the discovery, they called in help from the San Bernardino County Sheriff's Department narcotics unit to seize the mushrooms and dismantle the operation.

Officers went to a commercial burglary near Sultana Ave & 8th St. where they found a large “magic mushroom” grow. Thanks to our partners @SBCSDNarcsGangs for helping us dismantle the grow which contained 1,074 trays of growing mushrooms and 92.5 lbs of dried mushrooms. pic.twitter.com/wwwh8TKC8w

There was no immediate word on arrests or charges.

California lawmakers are considering a bill that would make "magic mushrooms" and other types of psychedelic drugs legal.

Two years ago, Oregon became the first state to decriminalize the active ingredient in "magic mushrooms."

But for now, the psychedelic ingredients in "magic mushrooms" remain illegal in California.