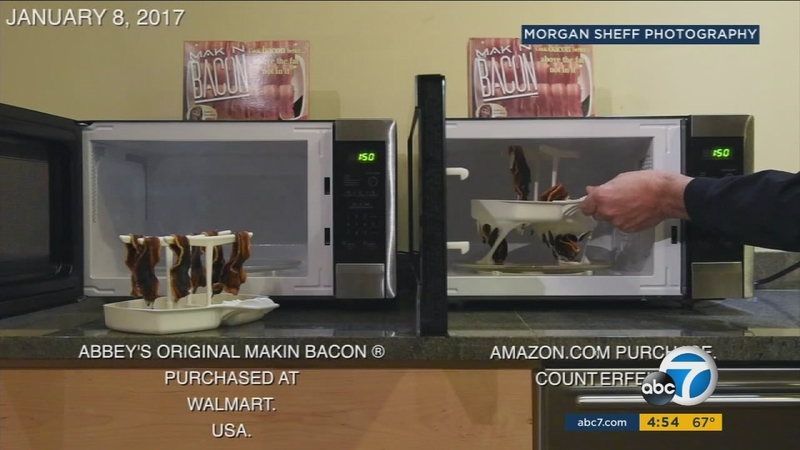 LOS ANGELES (KABC) -- A local family-owned business which has been around for 23 years says it is on the brink of collapse thanks to counterfeiters selling cheap knockoffs from China on Amazon.

It was Abby's idea when she was just 8 year old. They were trying to figure out a way to ring out bacon grease. Their invention - a rack to hold the bacon while it cooks in the microwave and the grease drops away - took off.

But now, they say, the product's reputation is being ruined.

"We manufacture it in America. And we are having right now an onslaught of counterfeit merchandise that is coming in from China that is being fulfilled by Amazon," John Fleck said.

The knockoffs come in identical packaging, including Abbey's face, but the materials used in their manufacture are cheaper and pose a hazard to the consumer, the Flecks say. They have documented the counterfeit product melting when microwaved.

They have also received complaints from consumers who believed the defective products came from their company. They say Amazon in particular is not taking responsibility to ensure goods sold in their marketplace are real and not counterfeits.

"Right now it is very scary," Abbey said. "It seems like it could be the end of our company. These online marketplaces are so vast. For someone like us to police it is pretty much impossible."

They ultimately hope their story will spur legislation to protect business owners and their trademarks.