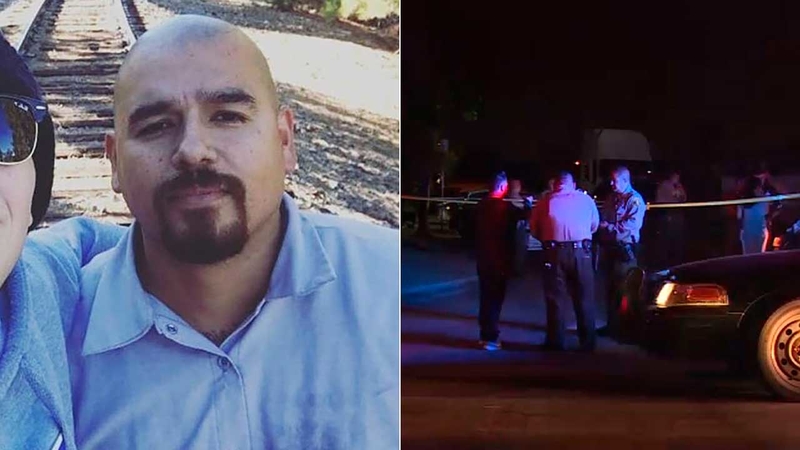 Sheriff's deputies responded to the 8200 block of Rexall Avenue at approximately 10:33 p.m. after a call regarding the well-being of a family member, the caller's father, who was reportedly wielding a knife, according to the sheriff's department.

The caller said his father wanted to be shot by police, according to a news release from the department.

The man allegedly had a "large knife" and was holding it to a woman believed to be a family member. When deputies told him to put the knife down, the man refused and advanced toward deputies, who shot the man several times, authorities said. The woman was not hurt.

The shooting occurred approximately 10 minutes after deputies arrived. The man died at the scene.

Family members said his name was Marco Antonio Vasquez. The coroner's office described him as being in his 30s.

Deputies first arrived to the location at about 8:10 p.m. when they received a call about a man holding a machete, yelling and banging on windows. Deputies and members of the sheriff's department mental evaluation team departed from the scene when they determined no crime had been committed and left Vasquez in the care of his family.

"They didn't have to do this," said Frank Mosqueda, Vasquez's uncle, who suggested that the deputies could have "shot him with a beanbag, shot him in the legs, do something."

In an interview at the location, sheriff's Lt. Derrick Alfred was asked why the subsequent confrontation had escalated so quickly.

When the deputies arrived, within seconds "they heard the commotion, they heard somebody yelling," Alfred said. "They had to make contact right away. They were immediately confronted with the male in the driveway holding a knife to a woman.

"So there was no time at that point to call for a mental-evaluation team," the lieutenant said. "Action had to be taken."

Video from the scene after the deputy-involved shooting happened showed distraught family members outside a home. Authorities said a large knife was recovered.

"I've never heard of him being suicidal," Mosqueda said of his nephew. "I've heard about him being a little ill, maybe, but I've never witnessed it."