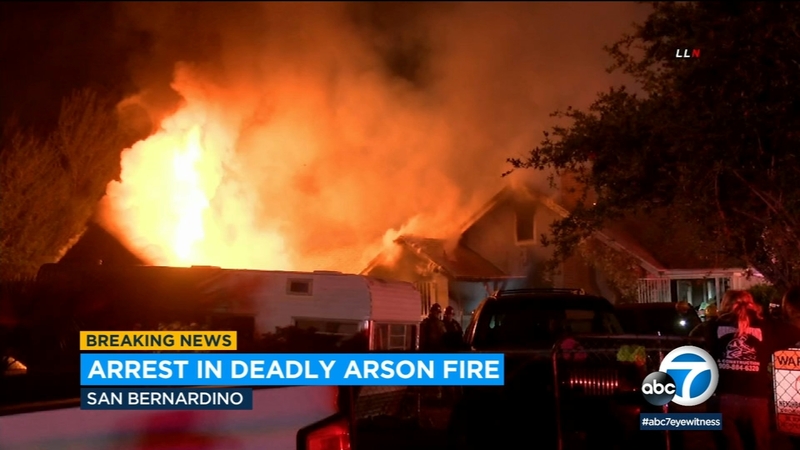 SAN BERNARDINO, Calif. (KABC) -- A 47-year-old man was arrested on suspicion of murder and attempted murder after a house fire in San Bernardino Saturday morning killed an 85-year-old woman and injured the suspect's parents.

Charles Tyson Christian of San Bernardino was arrested after deputies conducted an investigation into a house fire in the 7200 block of Tippecanoe Avenue that erupted around 2:14 a.m., according to the San Bernardino County Sheriff's Department.

The department says deputies saw heavy smoke and flames at the rear of the home when they arrived at the scene.

Douglas Guyette, 68, and his partner Linda Guyette, 67, managed to escape, but suffered burn injuries when they returned to save the 85-year-old woman, according to authorities.

Firefighters were able to rescue the woman, but she later succumbed to her injuries at St. Bernadine Medical Center. She was identified as Charolette Knight.

During the course of the investigation, deputies contacted and interviewed Christian, the Guyette's son. Authorities say he was then arrested and booked for murder and attempted murder.

Douglas Guyette remains hospitalized in intensive care, according to a news release from the sheriff's department. Linda Guyette was hospitalized and later released.