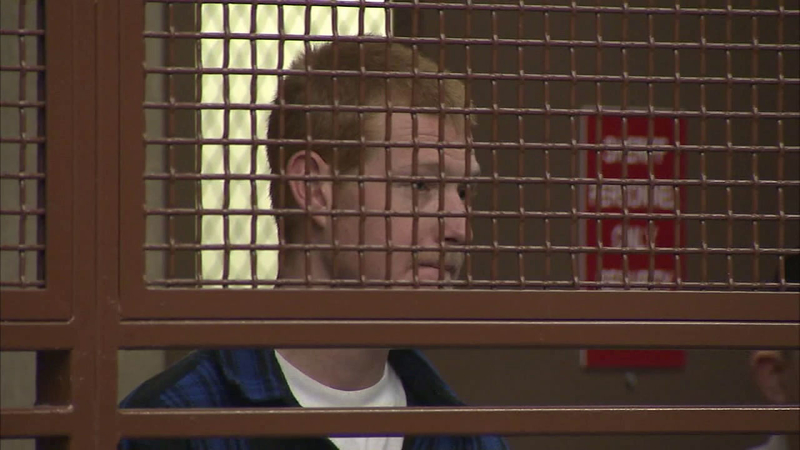 LOS ANGELES (KABC) -- A man filed a lawsuit against Redmond O'Neal Thursday, accusing the 33-year-old of a vicious attack the man said was motivated by his sexual orientation.

Ken Fox announced the lawsuit with his attorney Gloria Allred. Fox said he was walking to the laundromat on May 2, when he was allegedly attacked by O'Neal.

Fox, who is gay, said O'Neal called him a homophobic slur before attacking him. During a morning press conference, Fox recalled the terrifying moments of the assault.

Around 8 p.m. that day, Fox was carrying a load of laundry when he encountered O'Neal, who was wearing a hooded sweatshirt, baggy pants and carrying a bottle in a paper bag. Fox said that when he looked at O'Neal he yelled, "What are you looking at (expletive)?"

Fox said O'Neal then struck him with a bottle, he fell and while he was down that O'Neal began throwing punches and threatening him while screaming more slurs and expletives.

"I felt trapped, like a wounded animal. I literally thought I was going to die. I screamed, he called me more names. By then, I was kneeling on the sidewalk, my broken glasses cutting into my face, bleeding all over myself and all I could do was scream until he just walked away," Fox said.

He said he's had nightmares of the attack almost every night since then. In the lawsuit, Fox is seeking punitive and compensatory damages, including medical bills. In addition to the lawsuit, the Los Angeles District Attorney's Office filed a criminal felony assault charge over the attack, Allred said.

Fox, who was in tears while speaking at the press conference, said he needed to speak up to defend other people in the LGBTQ community.

"I've spent the last four months recovering from what Redmond O'Neal did to me. I am speaking out today because I need to do what I can to make sure this man never injures or hurts another defenseless (expletive) ever again," Fox said.

Earlier this year, LAPD robbery detectives were investigating a series of crimes that happened in the Venice Beach and Palms neighborhoods between May 2 and May 5.

Authorities believed the crimes were committed by the same suspect and that person was later determined to be O'Neal.

During the spree, the suspect randomly attacked five men in unprovoked confrontations. Two of those men were seriously injured - one was stabbed in the head.

On May 8, O'Neal was arrested after being identified as the suspect in a 7-Eleven robbery. After his arrest, authorities said the crime spree ended and detectives said O'Neal strongly matched the suspect's description in those attacks. The suspect in the crimes was described as having red hair and distinct tattoos.

He is scheduled to appear in court on Friday.