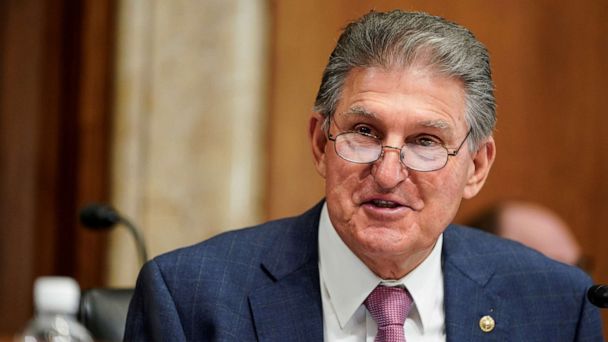 Sen. Joe Manchin, D-W.Va., reiterated his call on Sunday for a strategic pause on the $3.5 trillion budget resolution, while Sen. Bernie Sanders, I-Vt., doubled down on the need to pass both the bipartisan infrastructure and budget reconciliation bills.

"The urgency -- I can't understand why we can't take time to deliberate on this and work," Manchin told ABC "This Week" anchor George Stephanopoulos.


Sanders, the Senate Budget Committee chairman, told Stephanopoulos that he believes both bills will be passed.

"I think we're gonna work it out, but it would really be a terrible, terrible shame for the American people if both bills went down," Sanders said in an interview that followed Manchin.

The budget resolution calls for investments in climate change policy, childcare and other social programs, and is wider in scope than the bipartisan infrastructure bill, which includes measures to improve the nation's physical infrastructure.

Manchin and Sen. Kyrsten Sinema, D-Ariz., another moderate Democrat, are key votes in the evenly divided Senate -- Democrats need all 50 votes to pass the budget reconciliation. Sinema has also expressed concern over the price tag of the bill.

The tentative deadline for Senate committees to turn in their draft legislation to Senate Majority Leader Chuck Schumer and Sanders is Wednesday and House Speaker Nancy Pelosi said a bipartisan vote on the infrastructure package is scheduled on Sept. 27. But Manchin argued there is no need to pass a budget package as soon as next week.

"No one is saying they're losing their benefits, because they're going to extend up through next year," Manchin said. "Why are we rushing for this one week?"

The moderate Democrat wrote an op-ed in the Wall Street Journal on Sept. 2 calling for a "strategic pause" on the budget resolution that Democrats took the first step in passing last month.

Stephanopoulos asked if Manchin is concerned he may hold up the bipartisan infrastructure bill if he votes against the economic bill. Manchin said he "respectfully disagrees" with Sanders.


"I never thought the purposes of our -- the progress that we make in legislation was basically hold one hostage over the other," Manchin responded. "You have a bipartisan bill in the most toxic atmosphere that we have ever had politically."

"If you don't need bridges fixed or roads fixed in your state, I do in West Virginia," Manchin added. "I have got all the problems that we have addressed in the bipartisan infrastructure bill, and that's the one that has the emergency."

Stephanopoulos pressed Manchin on his ideal price point for the bill.

"What's your bottom line? How long should the pause last? And what's the most you would accept in a final reconciliation bill?" Stephanopoulos asked.

In response, Manchin only said that he did vote to use reconciliation, a means for Congress to adjust budgets including through tax spending, because he was opposed to the 2017 tax cuts implemented under the Trump administration. Corporate rates were slashed from 35% to 21%, adding over $1 trillion to the national debt.

"I voted to go on reconciliation because I believed that the 2017 tax codes were weighted to the high-end wealthy," Manchin said. "I thought we needed to make some adjustments, but I'm not going to make adjustments on how much I want to spend."

Manchin reaffirmed his concerns about inflation and adding to the national debt. The Biden administration wants to raise rates back up to 28% to cover the cost of the bill, but Manchin has previously said he does not want to go above 25%.


Sanders emphasized the scope of the reconciliation bill, arguing that polling has shown now is the time for Congress to tackle these challenges through passing both bills.

"Working families cannot afford child care for their kids, young people cannot afford to go to college," Sanders said. "And then on top of all of that, the scientific community is telling us that we're looking at a cataclysmic crisis in terms of climate -- Oregon is burning, California is burning."

"I think we can do all of this," Sanders added. "We can do the physical infrastructure. We can do the reconciliation bill, create millions of good jobs, and finally tell the American people that we are going to stand up for working families."

Stephanopoulos pressed Sanders on the slim Democratic majority in the Senate.

"That is a possibility, and I think that would be a disaster for the American people," Sanders responded. "But you've got the president of the United States, you've got leadership in the House and the Senate ... you know, this is not Joe Manchin versus Bernie Sanders."

Sanders added that the "real danger" is that the infrastructure bill will not pass in the House, as some progressive Democrats have pledged to not vote for it unless the budget bill is on the table as well.