A Marine Corps veteran is recovering after he says he was seriously injured by police rubber bullets during Saturday's protest in the Fairfax district.
KABC 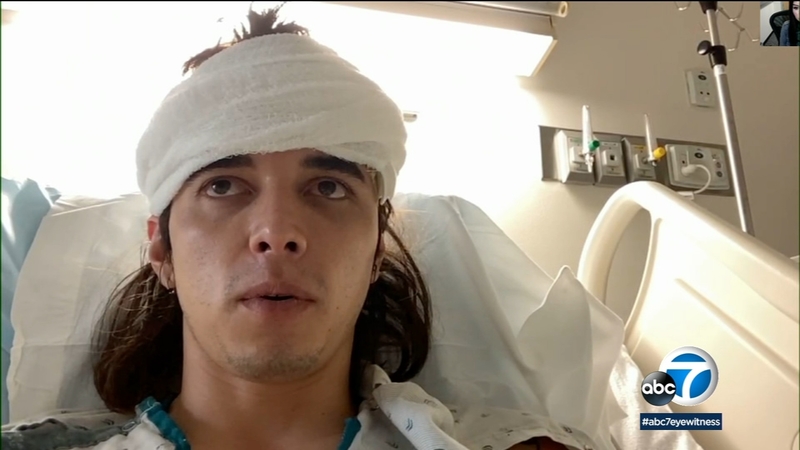 LOS ANGELES (KABC) -- Most of the protests around Southern California the last several days over the death of George Floyd have been peaceful, but there have been incidents of violence.

A Marine Corps veteran is recovering after he says he was seriously injured by police during Saturday's protest in the Fairfax district.

C.J. Montano, his head still wrapped in bandages, says his vision is improving as he recovers in the hospital.

He says he was at the protest and people were peacefully walking in the streets, but tensions seemed to escalate when officers showed up. Some people started throwing bottles and other objects at officers.

He said he tried to talk to officers to offer to help calm down the crowd.

Montano says police shot him with rubber bullets, hitting him in the stomach and chest. He fell down twice, but got up - then he was hit in the face.

"I'm on blood thinners, so I started leaking blood pretty bad," he said.

"This one gentleman, I don't know his name. I had my arm around him. He carried me a block away."

It was the same night that looters broke into a nearby Nordstrom store at the Grove shopping center and a Los Angeles Police Department kiosk was set on fire.

Montano says he was part of the original protest because everyone deserves equality and justice.

"I'm not trying to go out there to harm anyone or bring a bad name to police officers. But I'm trying to bring good to the people that deserve it."