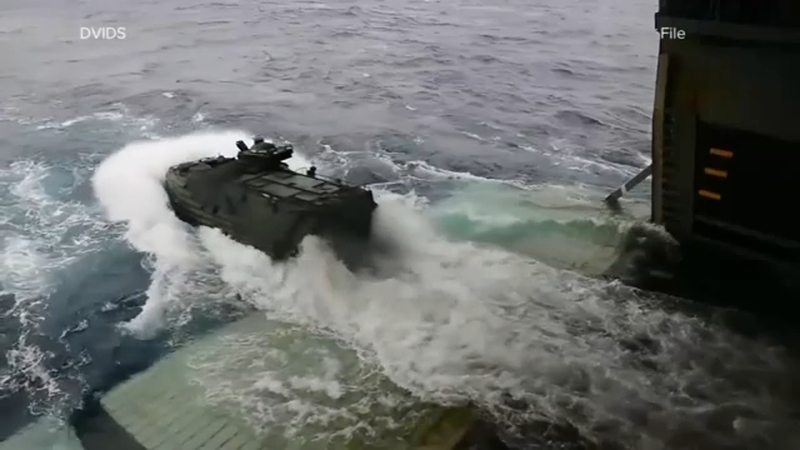 CAMP PENDLETON (KABC) -- The remains of seven Marines and a sailor who died in a training accident near San Clemente Island were recovered on Friday.

The remains of seven Marines and a Sailor were successfully recovered Aug. 7, 2020, after underwater salvage operations following the July 30 mishap involving an amphibious assault vehicle off the coast of San Clemente Island. pic.twitter.com/3vhcvhCVfc

Seven Marines, three of them from Southern California, and one Navy sailor were presumed dead on Sunday after going missing when their landing craft sank off during a training exercise July 30 near San Clemente Island.

Officials with the 15th MEU, I Marine Expeditionary Force (MEF), identified the Marine who was killed and seven Marines and one sailor who were presumed dead after the accident.

Lance Cpl. Guillermo S. Perez, 20, of New Braunfels, Texas was pronounced dead at the scene before being transported by helicopter to Scripps Memorial Hospital in San Diego. He was a rifleman with Bravo Company, Battalion Landing Team (BLT) 1/4.

Lance Cpl. Marco A. Barranco, 21, of Montebello, a rifleman with Bravo Company, BLT 1/4.

A Marine rifleman with Bravo Company, BLT 1/4 and a Marine AAV crewmember with Mechanized Co., BLT 1/4 were injured. Both were transported from the scene to Scripps Memorial Hospital by helicopter.

According to the Marines, the accident happened at about 5:45 p.m. on July 30 when Marines in the amphibious assault vehicle reported taking on water.

Fifteen Marines and one sailor were inside the AAV at the time. Eight Marines were rescued.

All of the Marines involved were assigned to the 15th Marine Expeditionary Unit, based out of Camp Pendleton.

The I Marine Expeditionary Force is a Marine Air Ground Task Force whose mission is "generating, deploying, and employing ready forces and formations for crisis response, forward presence, major combat operations, and campaigns."

The amphibious assault vehicle involved has been recovered since the training accident.

Officials said the cause of the July 30 incident is under investigation.

The Navy has located a seafaring tank that sank off the Southern California coast last week and was working to recover human remains, officials said Tuesday.