He's accused of selling illegal parts to an undercover FBI agent that would turn a handgun into a fully automatic firearm.
KABC
By Rob McMillan 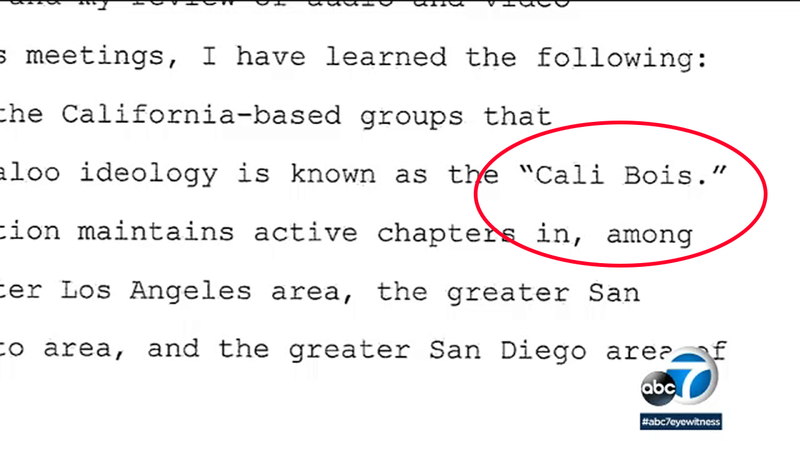 POMONA, Calif. (KABC) -- A Pomona man is facing federal weapons charges in connection with his alleged involvement in an anti-government extremist group known as the Cali Bois.

Matthew Edward Chen is accused of selling illegal parts to an undercover FBI agent that would allow a handgun to operate as a fully automatic firearm.

According to the criminal complaint, Chen is a member of a group known as the Cali Bois, which operates under the boogaloo movement, an anti-government concept advocating the violent overthrow of government.

"They're a dangerous, amorphous culture," said Brian Levin, the director of the Center for the Study of Hate and Extremism. "Most of it is venting online, but they include a lot of people who glorify weaponry and certain types of targeted violence."

According to the complaint, an undercover FBI agent met with Chen and others at a home in Murrieta. The purpose of the meeting was allegedly for Chen to provide multiple members of the Cali Bois training regarding firearm silencers and the National Firearms Act.

The complaint alleges that Chen sold the undercover agent a firearm silencer for $400 in cash. Later, Chen met the agent at a park in Pomona, where he allegedly sold him the parts required to make what is known as an auto sear, which would allow a handgun to perform as a fully-automatic weapon.

"Auto sears are a replacement for the rear plate on the slide of a Glock that enable it to act as a machine gun, basically," said Mike Riley, an investigator with the Riverside County District Attorney's Office. "One trigger pull will allow you to expel as many rounds as there are in the gun."

Riley did not speak directly to the case involving Chen, but said auto sears are a growing concern for law enforcement.

"The ability for someone to spray bullets, if they choose to indiscriminately, could cause a lot of damage so law enforcement is very concerned," he said.

Chen was charged with possession of an unregistered firearm after being arrested on Jan. 28.

The U.S. Attorney's Office is not commenting on the case against Chen. His next scheduled federal court appearance is Thursday, Feb. 17.