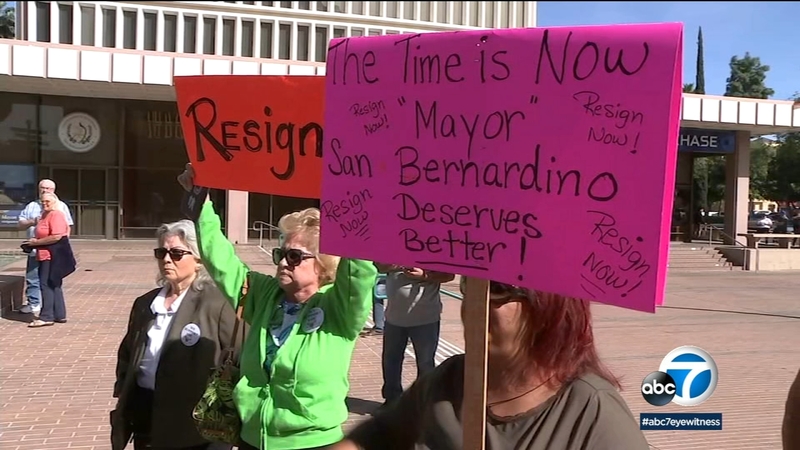 Protesters on both sides were chanting in support or against the mayor's reported harassment and bullying. Valdivia is also accused of failing to report contributions and using city time and resources to raise campaign funds.

People in support of Valdivia shouted, "Hell, no, the mayor won't go!"

While a group of men and women in support of the accusers rebutted, "You go work for mayor. Let's see how you feel!"

"He would constantly yell and tell me I was not high functioning," Don Smith, a current employee, said regarding his experience working for the mayor.

Smith took some time off of work after his grandmother passed away.

A former employee, Alissa Payne, also reported her experiences when she worked for the mayor.

"Slowly but surely the advances would come," Payne said.

Payne reported not only did the mayor try to get her drunk, but he also allegedly touched her inappropriately. While Payne no longer works for the mayor, she still feels worried for the well-being of her family because she still lives and works in the city.

"I'm just worried. I don't want to be retaliated against," Payne said.

Supporters of the mayor also gathered outside San Bernardino City Hall to argue in the mayor's defense.

Supporter Paul Sanborn said that the accusers may not be lying, but they also may not be the right fit for the job either.

"They've never been taught how to work if you understand me, you give them something to do, it doesn't get done today or tomorrow, it winds up at the end of the week," Sanborn said.

Other supporters claim Valdivia will help the city out of bankruptcy, which the city has reported to have recovered from in 2017.

In a statement, Valdivia declined to comment on the subject until the city completes its own investigation.
Report a correction or typo
Related topics:
politicssan bernardinosan bernardino countysexual misconductharassmentsexual harassmentpoliticsworkplace
Copyright © 2021 KABC-TV. All Rights Reserved.
More Videos
From CNN Newsource affiliates
TOP STORIES