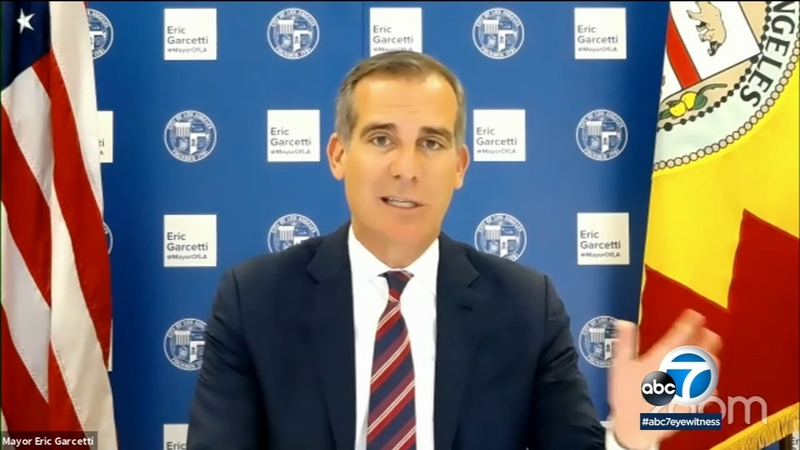 LOS ANGELES (KABC) -- Los Angeles Mayor Eric Garcetti and a coalition of American mayors on Friday launched an initiative to work toward reparations for Blacks in an effort to recompense for slavery and centuries of systemic oppression.

"We've never had a serious solutions-oriented conversation about restitution to enslaved people or to their descendants. We've never adequately addressed the fact that in America the average Black family earning $100,000 a year lives in a neighborhood with an average income of $54,000 a year. Or that in my city, not just the 10 to one wealth gap but a nearly 100 to one wealth gab between white and Black families exists,'' Garcetti said.

The mayors in the Mayors Organized for Reparations and Equity (MORE) coalition have committed to:
-- supporting HR 40 in the U.S. House of Representatives, which would establish the Commission to Study and Develop Reparation Proposals for African Americans;
-- forming advisory committees made up of local Black-led organizations in their cities to formally advise the mayors on an approach to reparations and identify funding sources; and
-- establishing pilot reparation programs targeting a cohort of Black residents.

The Chicago suburb Evanston is about to do something no other city has done in the country: pay reparations to some of its Black residents.

"We come from cities large and small, urban and suburban. From the cradle of the South to the heartland of the Midwest, and we know that we have an obligation to listen to the booming truths of our past and to those who are still held captive to them in our present," Garcetti said.

Garcetti added that cities do not have the funds to pay for reparations themselves and need the federal government's support.