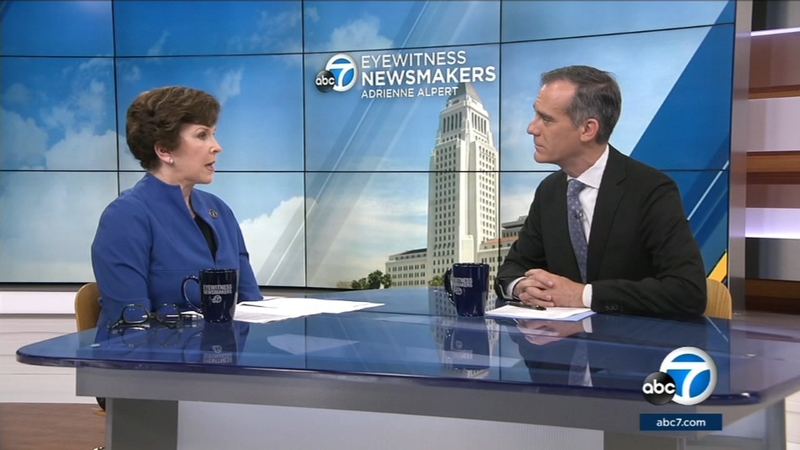 LOS ANGELES (KABC) -- On Eyewitness Newsmakers, L.A. Mayor Eric Garcetti addressed the FBI raids on the LADWP and the city attorney's office in connection with the utility's over-billing scandal that started in 2013.

The mayor said the city has its own DWP investigation ongoing, stating: "We had started an investigation as well, concurrent with what the FBI does, so we support them. Any team that comes in from the FBI, prosecutors or investigators, to help in this mission, I 100% support, and I expect everybody to do the same in the city. I have zero tolerance for any impropriety."

Garcetti picked a new DWP chief to take over in October, but put him in office immediately as interim, pending Council approval.

"Clearly public trust is the most important thing in the department, we've had amazing progress and I want to keep that going," the mayor said. "I think that leadership change was necessary. And we got a great leader in Marty Adams, who is experienced, who is well-respected, and he can make sure he can clean house and continue the progress that we have made."

The mayor warned, "This week's actions that we saw, first of all, I'm the son of a prosecutor, I told any of our city employees, if you're asked to help, be prepared to assist. And if you've crossed any lines, be prepared to pay the price."

This week came news that HUD Secretary Ben Carson is withholding $80 million in federal housing money for L.A.'s noncompliance with ADA. The mayor is confident Carson's concerns can be resolved.

"This week, we sent a delegation to meet with Secretary Carson's folks and we sat down. I'm optimistic; we agree on the goal-there's no conflict of that to build 4,000 units or renovate 4,000 units of accessible housing." Garcetti added, "Now the devil's in the details of how. When we resolve that, we can get those $80 million back and move forward."

State Homelessness Task Force co-chairs L.A. County Supervisor Mark Ridley-Thomas and Sacramento Mayor Darrell Steinberg are proposing consideration of a "right to shelter" law like one in New York. The mayor says it's worth looking into, with conditions. "First, as long as it's not on our backs to pay for it and the state would pay for it like in New York State, the state gives almost $2 billion to the city to make sure that happens."

He added, "They can't just be warehouses where nobody ever moves out of there. They have to be places where people can get out of shelters so we're not paying for the rest of their lives, and into housing and put their lives back on track."

Viewers asked the mayor about the city's chronic parking shortage.

"We have to also recognize parking problems come from our planning problems, which is why I asked all our community plans be updated, not only for what our parking requirements are, but put jobs and housing and shopping closer together."
Report a correction or typo
Related topics:
politicslos angeleseric garcettieyewitness newsmakers
Copyright © 2022 KABC Television, LLC. All rights reserved.
EYEWITNESS NEWSMAKERS
Eyewitness Newsmakers talks LA Pride, LGBTQ challenges
Eyewitness Newsmakers - Paying for college amid rising costs
What you need to know about California's water emergency
How the Port of LA is addressing the backlog
TOP STORIES
Body of 9-year-old drowning victim recovered in Lake Elsinore
'Full House' star Jodie Sweetin shoved by LAPD during protest
Target, Walmart weigh paying you not to bring back unwanted items
LA County sees rise in COVID hospitalizations
8 ejected after wild brawl between Angels, Mariners in Anaheim
At least 730 flights canceled across US on Sunday
3rd day of protests against abortion ruling held in downtown LA
Show More
$1.4 million Powerball lottery ticket sold at Glendale gas station
At least 6 dead, 200 injured after stands collapse during bullfight
Did corporate greed fuel inflation? It's not the biggest culprit
Heat prompts concern as Jurupa Valley brush fire chars 110 acres
There are many ways to eat healthy amid high food prices, experts say
More TOP STORIES News