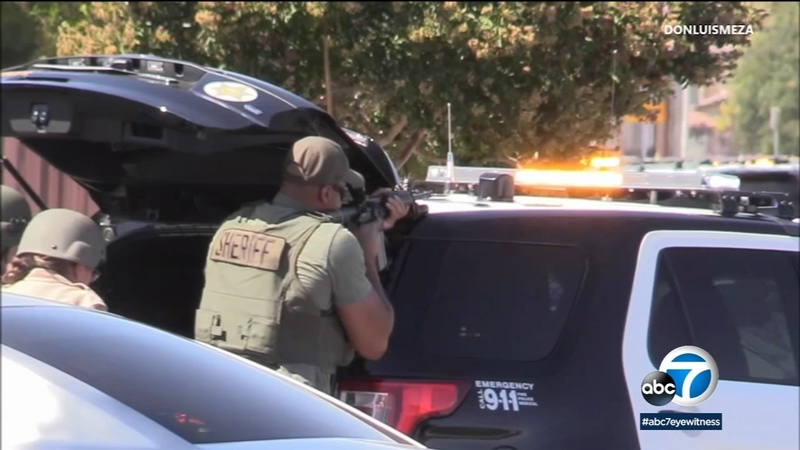 LANCASTER, Calif. (KABC) -- The Los Angeles County Sheriff's Department and the mayor of Lancaster are facing fallout from how they handled a report of a shooting of a deputy that turned out to be false.

The report of the shooting from 21-year-old patrol trainee Angel Reinosa triggered a massive manhunt near the Lancaster sheriff's station.

Reinosa reported being shot in the shoulder while he was walking in the station's parking lot. He said the shots came from a nearby apartment building. Police evacuated the building and searched it floor-by-floor for the shooter, but found no suspect.

Then late Saturday night came the stunning follow-up: Reinosa had made it all up, officials said.

"There was no sniper no shots fired and no gunshot injury sustained in the shoulder," Capt. Kent Wegener with the Los Angeles County Sheriff's Department.said Saturday.

"They feel hurt, they feel betrayed," said Bruce Thomas, a former sheriff's deputy and law enforcement expert. "The most important thing is that this person tarnished the badge they work so hard to wear."

"He put everybody's life in danger - not just the public for this incident but also all the sheriff's deputies who drove their cars at a high rate of speed to get there for an officer who's been injured in the shooting," Thomas added.

Residents of the apartment building say they are upset with the way it was handled.

"The things that they put us through didn't make sense and then all of a sudden it's a hoax," said one woman.

Sheriff Alex Villanueva issued a statement saying in part: "Like any subject of an internal investigation, Deputy Reinosa is entitled to due process. I will not tolerate anyone who willfully violates their oath of office, makes a false police report, wastes valuable public safety resources, and causes fear in the community."

At the time of the incident, Lancaster Mayor R. Rex Parris described the apartment building as housing for those with mental health issues. He criticized the planning decisions that led to such a building being located overlooking a sheriff's station.

But that turned out to not be accurate. The building is low-income housing and while it may house some people who are undergoing mental-health treatment, it is not designated specifically for that purpose.

The residents of that building now want an apology.

"So for him to throw us under the bus and then not come back and do a retraction - he's either woefully ignorant or he's willfully ignorant," said building resident Kent McGuire.

The mayor of Lancaster was not available Monday for an interview and has not commented about his earlier statements.