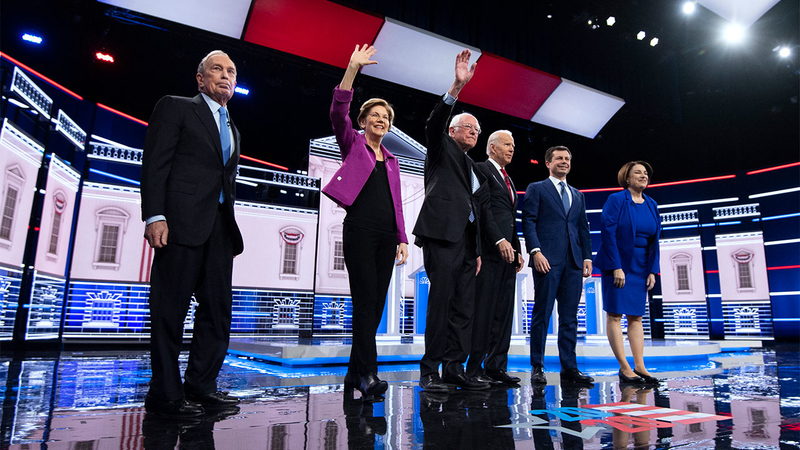 The former New York City mayor was forced to defend his divisive record on race, gender and Wall Street in his debate-stage debut, while Sanders, appearing in his ninth of the 2020 primary season, tried to beat back pointed questions about his health and his embrace of democratic socialism.

Fierce exchanges throughout the two-hour affair marked the most aggressive sustained period of infighting in the Democrats' yearlong search for a presidential nominee, reflecting rising urgency in a 2020 primary season that is already deep into its voting phase. Nevada votes Saturday. South Carolina the week after. And more than a dozen states host a series of Super Tuesday contests in less than two weeks.

In a fight for her political life, Massachusetts Sen. Elizabeth Warren was a leading aggressor against Bloomberg. She was on the attack throughout the night followinga sharp slide in the polls, calling Bloomberg "a billionaire who calls people fat broads and horse-faced lesbians."

Sanders lashed out at Bloomberg's policing policies as New York City mayor that he said targeted "African-American and Latinos in an outrageous way."

Bloomberg defended himself on all counts and took a shot at Sanders' electability: "I don't think there's any chance of the senator beating Donald Trump."

Bloomberg later seized on Sanders' rising wealth: "The best known socialist in the country happens to be a millionaire with three houses!" Sanders defended owning multiple houses, noting he has one in Washington, where he works, and two in Vermont.

While Bloomberg was the shiny new object Wednesday, the debate also marked a major test for Sanders, a self-described democratic socialist who is emerging as the front-runner in the Democrats' nomination fight, whether his party's establishment likes it or not. A growing group of donors, elected officials and political operatives fear that Sanders' uncompromising progressive politics could be a disaster in the general election against Trump, yet they've struggled to coalesce behind a single moderate alternative.

Former Midwestern Mayor Pete Buttigiegwent after both Bloomberg and Sanders, warning that one threatened to "burn down" the Democratic Party and the other was trying to buy it.

Pete Buttigieg says Mike Bloomberg and Bernie Sanders are "the two most polarizing figures on this stage" and the Democratic Party can't let its presidential primary come down to those two candidates during the Nevada Democratic debate.

He called them "the two most polarizing figures on this stage."

Watching from afar, Trump joined the Bloomberg pile on.

"I hear he's getting pounded tonight - you know he's in a debate," Trump said.

Bloomberg and Sanders may have been prime targets, but the stakes were no less dire for the other four candidates on stage.

A Warren campaign aide said on Twitter that her fiery first debate hour was her best hour of fundraising "to date."

The other leading progressive in the race, Sanders came under attack from Biden and Bloomberg for his embrace of democratic socialism.

Sanders, as he has repeatedly over the last year, defended the cost of his signature "Medicare for All" healthcare plan, which would eliminate the private insurance industry in favor of a government-backed healthcare system that would cover all Americans.

"When you asked Bernie how much it cost last time he said...'We'll find out,'" Biden quipped. "It costs over $35 trillion, let's get real."

The debate was set at the Paris Las Vegas hotel on the heart of the Las Vegas Strip, bringing the political circus alongside the showgirls, slot machines and glitz that Las Vegas is known for. The casino, which sits directly across the Strip from the Bellagio's famous fountains, features a replica Eiffel Tower out front with legs that extend inside into the casino floor.

As Democrats were clustered inside the casino, outside on the Las Vegas Strip, Republicans hired a mobile electronic billboard truck to drive slowly in front of tourists, flashing a message promoting Trump's reelection.

While it was Bloomberg's night of attention voters won't formally judge his performance for another 13 days. After deciding to skip all four contests in February, he won't appear on his first presidential primary ballot until Super Tuesday.
Report a correction or typo
Related topics:
politicsnew york citynevadamichael bloombergvote 2020presidential debatedemocratsu.s. & world
Copyright © 2021 by The Associated Press. All Rights Reserved.
More Videos
From CNN Newsource affiliates
TOP STORIES