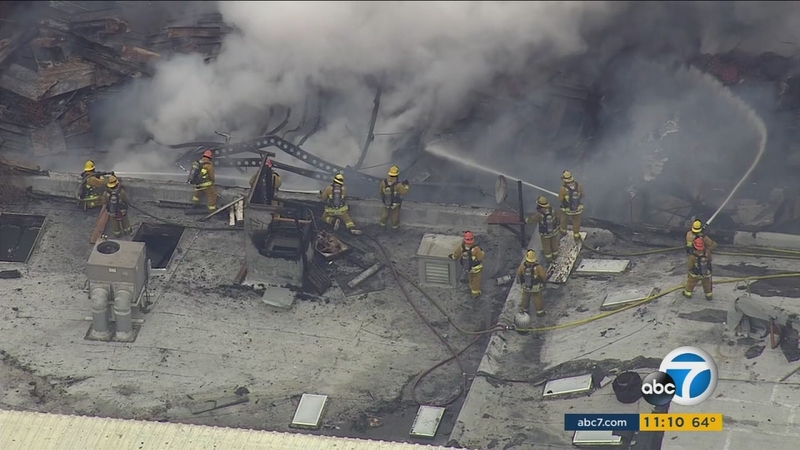 More than 100 firefighters began battling the magnesium-fueled fire in the 3500 block of Fruitland Avenue at about 2:30 a.m. The fire began as a second-alarm fire before it quickly turned into a third-alarm blaze.

At least three explosions were heard coming out of the fully-involved truck repair shop and sheet metal company. According to Randall Wright of the L.A. County Fire Department, the explosions were caused by water from the fire hoses hitting magnesium.

As L.A. County and Vernon firefighters were able to keep the fire from spreading but were allowing the magnesium to burn to avoid more violent explosions.

"Magnesium is very volatile. This is a very dangerous fire we are fighting right now. The tactic we are going to use now is we are going to allow the magnesium to burn...We're going to extinguish the fire around it, therefore, this fire is going to burn for a while. We'll let it all burn off and protect the property and lives next door to the building," Wright said.

Watch: One of several explosions at Maywood structure fire in 3500 blk of Fruitland Ave https://t.co/DIoByavB7yhttps://t.co/sctpRHtgsX

Approximately 200 residents were evacuated from their homes and thousands were temporarily without power due to burned power lines in the area.

The blaze was controlled at about noon.

Due to road closures and fire hazards, sheriff's officials urged the public to avoid the following streets:

No injuries were reported in the violent blaze, and the cause was under investigation, according to the Los Angeles County Sheriff's Department.