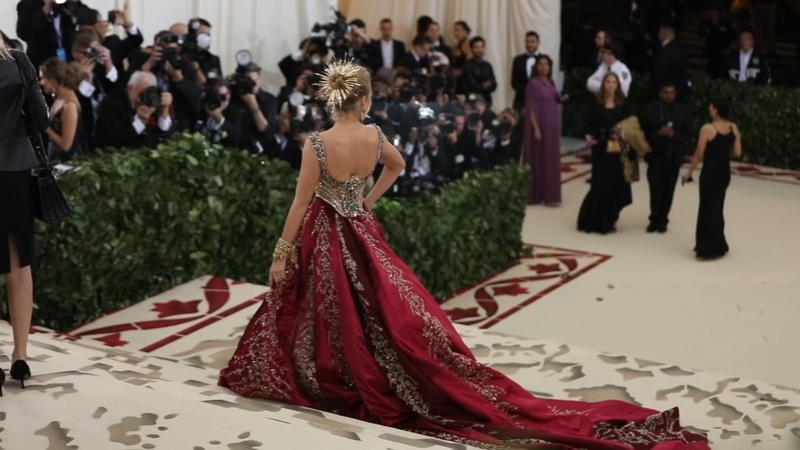 Always on point Sarah Jessica Parker chose her gown and headdress from a series of drawings by Dolce & Gabbana. The intricate headpiece was a Neapolitan nativity altar made to scale by the Italian design house.

Bella Hadid held court as a gothic priestess (is that a thing?), as her gold-embroidered headpiece fanned out over a simple black corset and skirt. The dramatic look was topped off with a structured, embossed leather jacket, emblazoned with a gold cross.

If anyone can make a mitre modern, it's Rihanna. The Grammy-winning artist arrived dripping in pearls and crystals in a Maison Margiela Artisanal minidress and ornate robe. Rihanna is never one to shy away from a grand entrance. Last year, she wowed in a dress covered in fluttery petal-like pieces by Japanese designer Rei Kawakubo.

Amal Clooney and Rita Ora were among the early arrivals to this year's Met Gala, the annual fundraising fete in New York that brings out Hollywood's elite for an evening of fashion and charity.

Clooney, one of the evening's co-chairs, arrived early in a striking silver corseted top, matched with black slacks and a cascading metallic, rose-patterned skirt. The ensemble, from designer Richard Quinn, made a crinkling sound all the way the Met's iconic steps.

Though the recent Vogue cover girl arrived with movie star husband George Clooney, the Academy Award winner knew his place. "I'm the flower on the side," he joked to reporters.

Wintour arrived at Monday night's event in a beaded off-white Chanel gown and a cross necklace alongside her daughter, Bee Shaffer and addressed rumors she may be soon step down as Vogue's editor-in-chief.

"I hope not," Wintour simply said before heading into the soiree.

The theme of this year's exhibit at the Metropolitan Museum of Art's Costume Institute - "Heavenly Bodies: Fashion and the Catholic Imagination," which focuses on the influence of Catholicism on fashion - manifested itself in red, the color worn by cardinals, and fuchsia, worn by bishops. Hints of the night's theme shown through on Olivia Munn's gold mesh headdress and Lynda Carter's updo, which feature the Star of David. Munn wore a custom H&M gown inspired by the Crusades.

Rita Ora's dreamy train trailed down the iconic steps of the Met as photographers frantically snapped pictures of her elaborate black headdress paired with a black Prada gown in layers a sheer fabric.