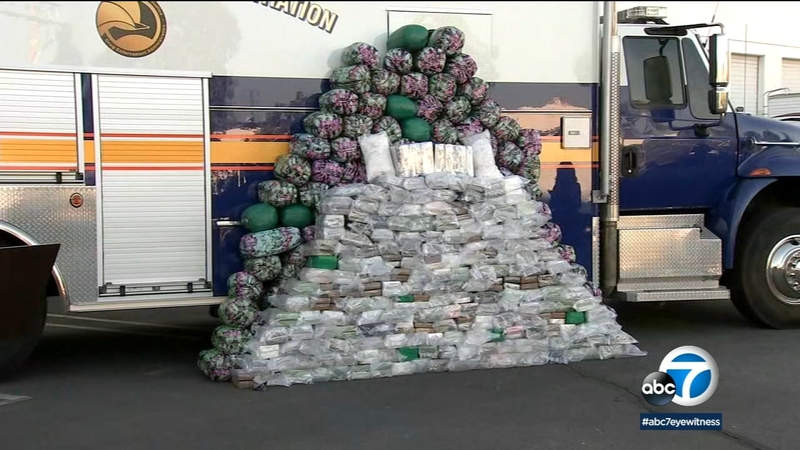 DEA agents seized about 2,224 pounds of meth, nearly 900 pounds of cocaine and 13 pounds of heroin that were stashed at several homes in Moreno Valley and Perris in Riverside County on Oct. 2 as part of Operation Crystal Shield.

"This is enough dope to provide a dose of meth for every man, woman and child in the United States and Mexico. It's a massive amount," said Timothy J. Shea, acting administrator for the DEA.

Coast Guard Cutters seized 18,000 pounds of suspected cocaine, worth an estimated value of $312 million dollars. This video is from one of the busts.

The drugs are tied to a cartel from the Mexican state of Sinaloa that's involved in the distribution and delivery of large amounts of cocaine and meth in Southern California, which later gets distributed throughout the country. Authorities added that Los Angeles is the center point for the operation.

"We are a hub city. There are four major airports here, there's countless freeways and package and parcel hub centers here that distribute throughout the United States," said DEA agent William Bodner. "That's why traffickers prefer to get the drugs here. It's also a larger city, easier to blend in. They can break the drug loads down and do distribution throughout the country."

It's not the only huge meth seizure in the region. On Oct. 9, U.S. Customs and Border Protection seized more than 3,000 pounds of meth at San Diego's Otay Mesa border crossing.

The drugs have a wholesale value of $18 million, worth a lot more on the streets, but officials on Wednesday stressed that the drugs would no longer make it there.