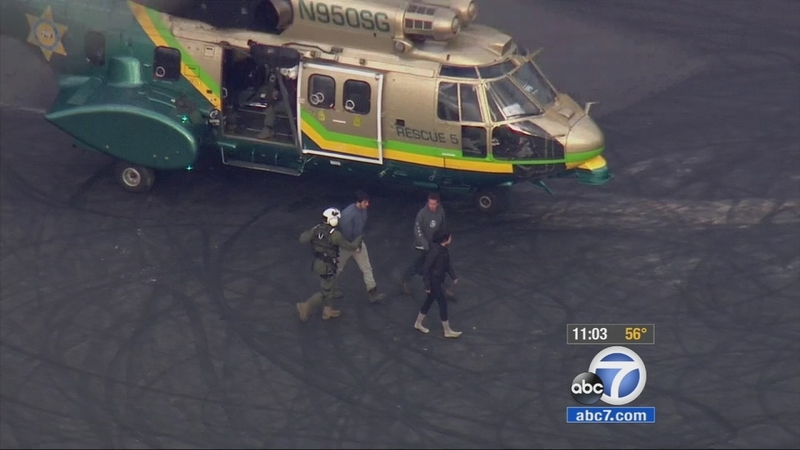 CRESCENTA VALLEY, Calif. (KABC) -- Four hikers who were reported missing overnight in the frigid Angeles National Forest have been rescued.

Sheriff's officials from Crescenta Valley said the three men and one woman were due back around 5 p.m. Monday. Family members called the sheriff's department when the hikers didn't return.

Officials found the hikers' vehicle near the Switzer campground off Angeles Crest Highway. They located the hikers around 7:30 a.m. after spotting smoke from a fire the hikers made to keep warm.

Three of the hikers were airlifted out. The other hiker, who only wanted to be identified as David, was able to walk out on his own with rescuers.

"It was a bit chilly, but we had a big fire going. So it was chilly on one side and then hot on the other and you'd turn around. We just had to keep up most of the night. We got little sleep because of that," he told Eyewitness News.

David, his 18-year-old son and two of his son's friends were prepared for a day hike with enough food and water. He said they were surprised to hear the search helicopters in the morning.

"We expected to just walk out this morning. We didn't really expect to be rescued, but it's all fine and good. I mean, we could've had a problem," he said.

No injuries were reported. Rescuers wanted to get the hikers off the mountain as soon as possible because of frigid temps and snow in the forecast.