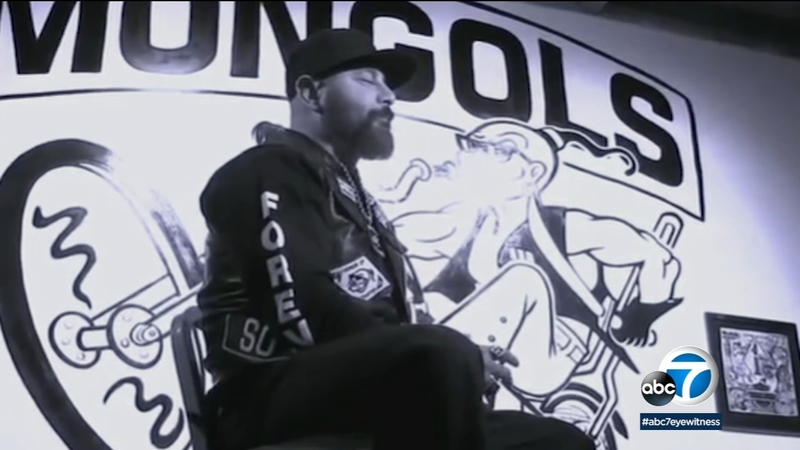 LOS ANGELES (KABC) -- There's a new twist in a federal case already marked by murder and mayhem. The Mongols Motorcycle Club was convicted in late 2018 of racketeering and conspiracy. Now the Mongols want a new trial and say their former president, David Santillan, was a confidential informant for the ATF.

The explosive allegations come after a secretly recorded video surfaced of Santillan talking to his wife about the lead ATF agent on the case -- John Ciccone.

Eyewitness News has obtained the video that was recorded in June of 2021 when David Santillan was drunk and despondent. He and his wife, Annie, were estranged after he had an affair.

The federal government said they're a convicted criminal gang, and Hell's Angels consider them enemies. They call themselves the Mongols Motorcycle Club - and they're one of the most notorious MC groups in the world.

Annie Santillan says she surreptitiously recorded the call because David's mistress had been harassing her.

"I assumed it was going to be her, so we videotaped," Annie Santillan tells Eyewitness News. "Because I needed evidence to show the military that they had someone having an affair with a married man."

In the call, David Santillan sobs and says he wants to reconcile. He was ready, he said, to get treatment for his drug and alcohol addictions. But then he began to talk about now-retired ATF agent John Ciccone, the lead agent on the racketeering case.

"John told me that I have one year, one year," Santillan says in the call. "He's retiring, he's retiring. After one year he's done and he can't protect me, so we have to have an exit strategy."

Annie tells Eyewitness News that her husband was "spinning out of control" and continued to cheat on her after the phone call. So, she sent the recording along with a text message to two other members of the Mongols Motorcycle Club.

The text reads in part: "You guys need to see this video..." and that David "has been working with the government is all [sic] entire time..." and that's "why he felt so comfortable to do what he does he is simply a CI In other words he is a rat."

After testifying briefly in court Monday, Annie told Eyewitness News that her husband has never been a confidential informant and that she only sent the text message because she wanted to destroy him in the eyes of the Mongols.

"All I wanted to do was to tarnish his image," says Annie Santillan. "I wanted him to feel kind of what I was feeling, the shame and embarrassment and betrayal."

A guilty verdict in a federal racketeering case may lead to the Mongols motorcycle club in Orange County losing trademarks rights to its logo.

David Santillan tells Eyewitness News that he was in a "really bad place" when the video was recorded and that he's never been disloyal to the Mongols.

"Absolutely not, unequivocally no," says David Santillan. "I've never cooperated in any way, shape or form."

Eyewitness News asked Santillan what he meant in the video about ATF agent Ciccone "protecting him." Santillan says he and Ciccone had a "rapport" after 25 years of dealing with one another. Santillan says he ran into Ciccone when he went to pick up some Mongols property that had been released after the trial. Ciccone told him he was retiring.

"He goes, I know you've been doing a bang-up job at the club, can't protect you from this point forward," Santillan recounted of their conversation. "I know we've had a rapport and I always looked out for you and you were always respectful."

"So, he gave me a heads up and that was it. That was all it was about. There was nothing nefarious about it."

"I want Ciccone here under oath," Judge Carter told the prosecution team. Carter went on to tell prosecutors he does not want their witnesses to use the words "to the best of my recollection."

Judge Carter also pressed Annie Santillan on why she specifically called her husband a confidential informant and "a rat" if she was just trying to hurt him.

"I was literally trying to destroy him," she answered, adding that she didn't understand what he was talking about in relation to Ciccone.

David Santillan says he was thrown out of the Mongols after a "closed door" meeting where he did not get a chance to refute the allegations against him.

Mongols attorney Joe Yanny says his clients want their 2018 racketeering conviction thrown out or at the very least a new trial. He alleges that Santillan sabotaged the trial by not allowing him to call Ciccone to the stand.

"I think they got David in compromising situations," Yanny tells Eyewitness News. "He was afraid, and I think he turned on his loyalty to the club to protect himself."