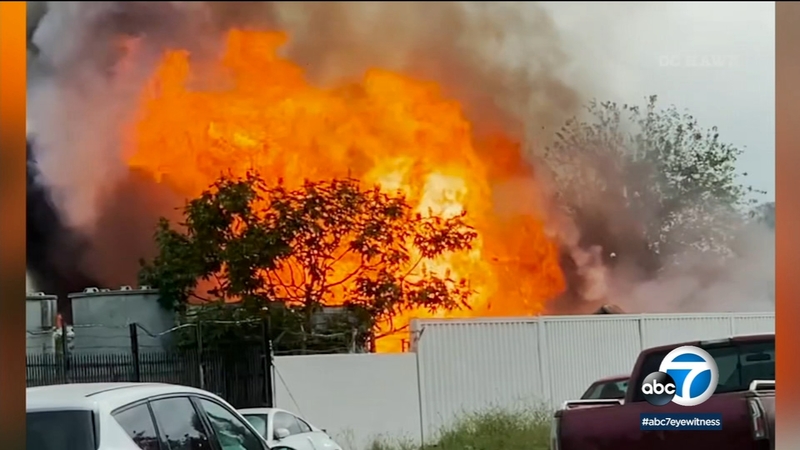 4 injured in explosions at metal recycling facility in Montclair

MONTCLAIR, Calif. (KABC) -- Four people were injured in a series of explosions Thursday morning at a metal recycling facility in Montclair that prompted nearby schools to be placed on a precautionary lockdown and for some areas to be evacuated, officials said.

The incident was reported about 9:15 a.m. at an industrial property in the 4200 block of Third Street, according to the Los Angeles County Fire Department.

The city announced a mandatory evacuation order shortly after 4:20 p.m. for some nearby areas due to potentially "dangerous" gases being released from the fiery explosions. The city said the evacuation order was made out of an abundance of caution and it was lifted several hours later.

The conditions of the victims and details about their injuries were not immediately known. Two patients were transported to a hospital by ambulance, while two others went to a medical center in civilian vehicles.

"A report of an explosion at a local factory (South region of Montclair) has been reported," the Ontario-Montclair School District said on Twitter. "NO IMPACT TO ANY OMSD SCHOOLS at this time, some schools have been placed on a PRECAUTIONARY LOCKDOWN."

A subsequent tweet said there was "no disruption to instruction."

Several concerned people in the area took to social media in the immediate aftermath of the explosions, which could be heard from miles away and sent a plume of thick black smoke rising high into the air. Video footage showed a dramatic fire at the facility.

"Everything was just exploding like a freaking war over here," witness Albert Castro said.

Emergency responders set up a perimeter in the area as firefighters used firehoses to douse piles of pressurized metal cannisters on the ground at the facility.

"I ran out my front door and things were flying already," said Bridge Boyd, who lives near the industrial property, referring to debris that was raining down on the neighborhood.

The shrapnel landed the roofs of homes and on parked vehicles. Castro's pants were partially ripped by the falling debris.

"I went to look at my car and I got hit in the leg," he said, adding that his car was "beat up" by the fallout.

"When you heat compressed-gas cylinders, there's always the potential risk that they could rupture," said Battalion Chief Ryan Dierck of the Montclair Fire Department. "So, because of that threat, we're assessing that with trained professionals to make sure that it's safe for the community."