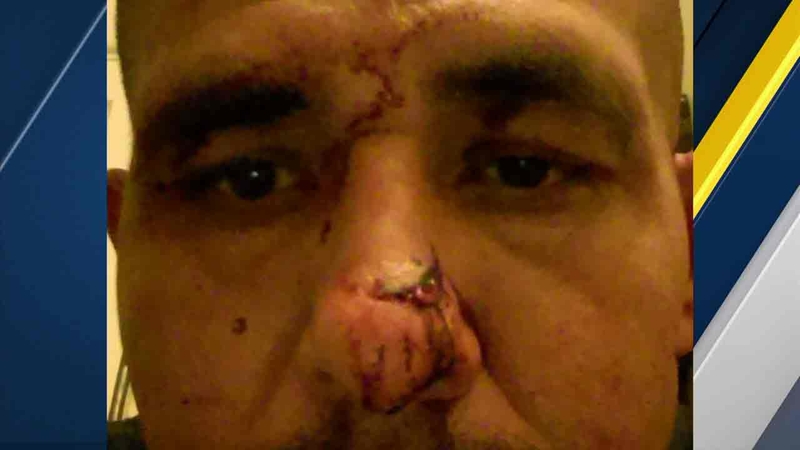 MONTEBELLO, Calif. (KABC) -- A man claims he was the victim of an unjustified beating by police in Montebello, but police are telling a different story.

Montebello police said they were back in the neighborhood knocking on doors and talking to neighbors to gather information about what happened. George Ortiz, meantime, said his injuries tell his story.

"It hurts physically and mentally. They messed me over," Ortiz said.

With his face cut and bloodied, Ortiz said he wants to sue Montebello PD for his injuries, and questions why he was arrested in the first place. He said he initiated the contact. He had called to report a car abandoned in the middle of the street.

What was unclear is what triggered a confrontation with officers.

Montebello PD officials said it has no information to release until its report is complete.

"Wait until you make any judgement until all the facts come out," said Sgt. Ismael Navarro of Montebello PD.

Ortiz said in the stress of the arrest, he suffered a seizure from his bipolar disorder, which he treats with medication.

He said he's been disabled since suffering a stroke, which causes uncontrollable shaking.

It only made matters worse, he said, when officers hogtied him and tried to get him in the police car.

"They couldn't close the doors. One of the officers kneed me and hit me right here in the nose," Ortiz added.

According to a police captain who spoke to ABC7 by phone, no report of force is in the arrest report so far. It's possible, he said, that Ortiz could have injured himself.

"If there is any injury sustained by a person, we automatically conduct a use-of-force investigation," Navarro added.

"He cut me, and the other officer socked me right here," Ortiz added.

Ultimately, Ortiz was released from jail with a ticket that said he had violated a gang injunction, interfered with police and was publicly intoxicated.

The 37-year-old denied all charges. While he admitted to offenses in the past, he said his disability has changed him. He's getting his record expunged.

"I am disabled. I am trying to be a better man," Ortiz said.