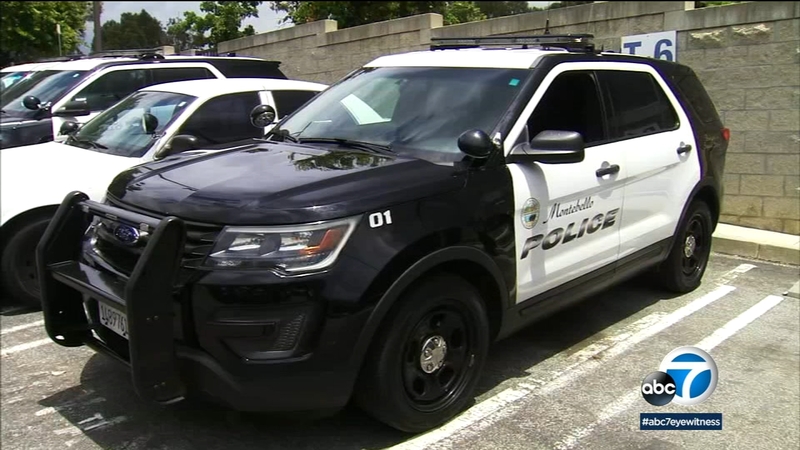 MONTEBELLO, Calif. (KABC) -- Montebello police are looking for a stolen patrol vehicle with a loaded AR-15 and other firearms that was missing for nearly a week before the department was aware.

Police made the discovery on Tuesday around 3 p.m. after noticing the black and white 2018 Ford Explorer was not in its designated spot at the station's unsecured parking lot. A loaded shotgun and loaded "less lethal" shotgun were also in the vehicle at the time of the theft. Police say all weapons were locked and secured in the vehicle, all keys were accounted for.

"If someone had enough time, they could cut the weapons out," Montebello police Sgt. Marc Marty said.

The vehicle, designated as Unit #9, has a California Exempt license plate of 1429238 with "Motebello Police" written on both sides and the rear.

Investigators determined that the SUV was taken from the parking lot on May 16 around 2:23 a.m. A person was captured on surveillance video getting into the vehicle and driving away in less than 30 seconds, according to police. Police are unsure how the suspect was able to break in so quickly.

"The unit was last assigned to an officer on the 16th of this month. His first day back wasn't until the 21st, and so it hasn't been assigned since then, and it wasn't until then that we noticed it was missing," Marty said.

The department said in a written statement that all law enforcement agencies were notified "while investigators contacted local repair shops and other vendors to ensure the vehicle was not being repaired. Investigators were also reviewing surveillance video before reporting the vehicle stolen."

Police are using GPS and other "investigative tools available to law enforcement" to locate the stolen vehicle.

"Anybody that's in or around that vehicle is gonna be considered armed and dangerous 'cause we have loaded weapons inside that vehicle," Marty said. "So if the suspect is watching this, and he realizes he did something he shouldn't and wants to turn it in, we'd love for him just to park it in a parking lot, lock it, leave it, call 911, tell us where it's at. Anyone else that comes upon the vehicle should not approach it."

Authorities say the best-case scenario would be that the stunt is a prank and that the vehicle is returned.

Authorities are asking anyone with information to call the Montebello Police Department at 323-887-1313. Anyone who sees the vehicle is urged to call 911.
Report a correction or typo
Related topics:
montebellolos angeles countytheftstolen car
Copyright © 2021 KABC-TV. All Rights Reserved.
More Videos
From CNN Newsource affiliates
TOP STORIES