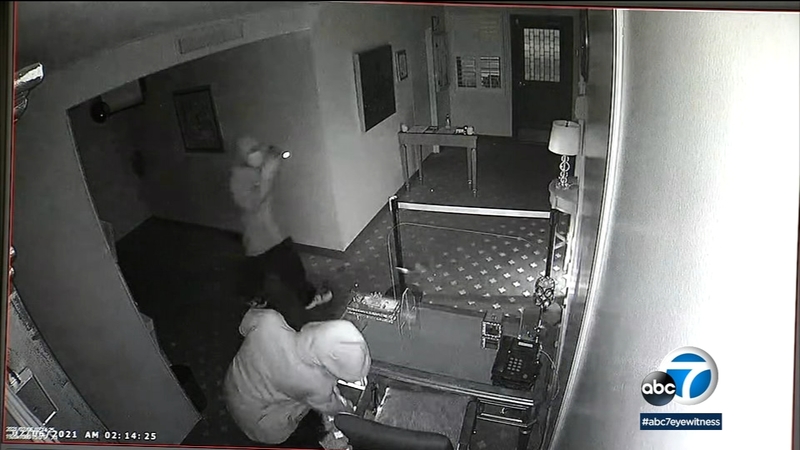 HAWTHORNE, Calif. (KABC) -- Authorities arrested two men for allegedly burglarizing a mortuary in Hawthorne and are working to see if they are linked to two similar break-ins in the area.

The arrest was made shortly after Hawthorne officers responded to a call of a burglary on Feb. 9 at 2:45 a.m. at a mortuary in the 13800 block of Hawthorne Boulevard.

After investigating and realizing the business had been burglarized but the suspects fled - and knowing that another mortuary had been hit just three days earlier - police decided to check up on another mortuary in the area.

When officers showed up about 3:15 a.m. at the mortuary in the 4200 block of Broadway Avenue, they found two men inside with flashlights.

Officers surrounded the building and when the two men came out, they were ordered to stop. One surrendered, while the other tried to flee but was quickly caught.

Police identify the suspects as Elias Dominguez, 39, and Edwin Jimenez, 26, both believed to be transients.

They were both arrested on burglary charges.

Officers are now working to determine if the same two men were responsible for the burglary earlier that night at the other mortuary, as well as the one on Feb. 6 in the 3900 block of Marine Avenue in Lawndale.

A search is underway for multiple suspects captured on video stealing from a mortuary in Lawndale. The owner of the mortuary says sacred Buddhist artifacts were among the items stolen.

In that Feb. 6 burglary, about $200 in cash and a number of sacred Buddhist artifacts were stolen from McKay's South Bay Mortuary by three suspects seen on video.