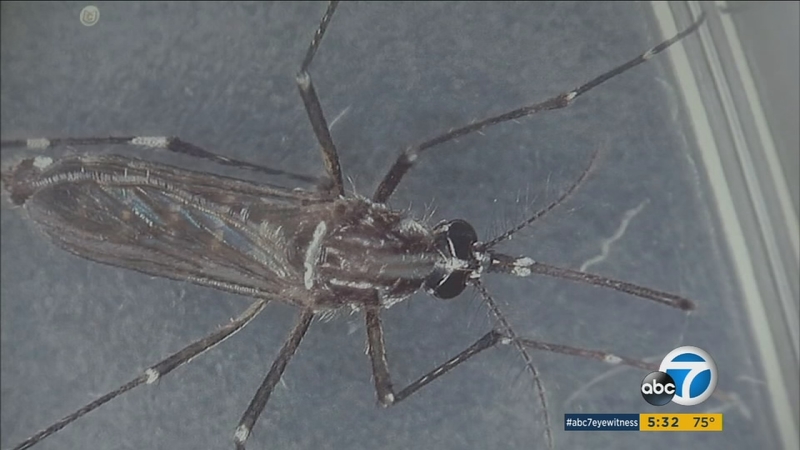 CHINO HILLS, Calif. (KABC) -- Efforts are underway to fight back against an aggressive invader spotted in Southern California - a mosquito species that has never been seen before.

"It's a little scary," said Deborah Sershion, who is worried about the newcomer to her Chino Hills neighborhood. "The one thing that I do know is that I've gotten more mosquito bites this year than I have in my entire life. So something's going on."

Known as Aedes aegypti, the black insects with white stripes are not typical mosquitoes. They are an invasive species with the potential to transmit yellow fever, dengue, the West Nile virus and the Zika virus.

"It is a day biting mosquito," said Brian Reisinger of the West Valley Mosquito and Vector Control District. "It will aggressively follow somebody to try to get a blood meal."

The agency has been increasing surveillance of the mosquito after one of the insects was discovered in a trap earlier this week.

Unlike other mosquitoes, Aedes aegypti lay their eggs by gluing them to the sides of small containers which then wait for contact with water.

ISCA Technologies, a Riverside based company, is helping to modernize how vector control districts deal with the problem. Biologists are working on several low-impact and targeted pest control solutions.
"We're getting the mosquitoes to do what we want -- either attracting them to a toxic point source or attracting pregnant mosquitoes to lay (eggs) in a treated water source," said Jesse Saroli, an ISCA biology manager.

The process uses odors such as pheromones or nectar-based compounds to lure the mosquitos away from their human blood meals.

"I just hope whatever it is, they get it and we're all safe," Sershion said.