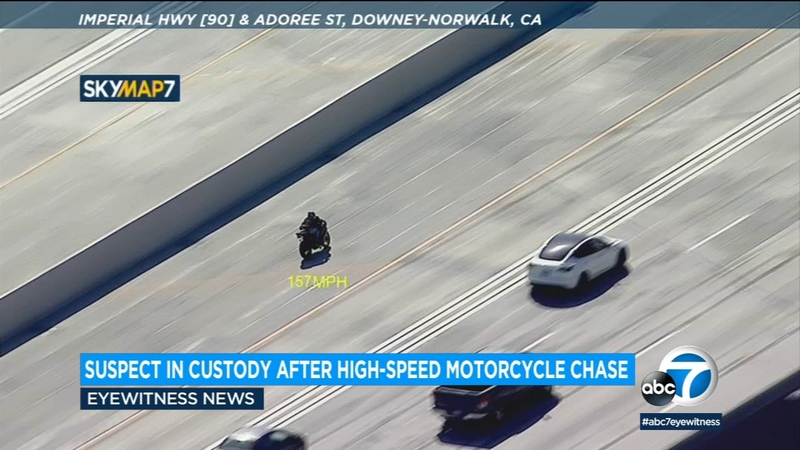 ORANGE, Calif. (KABC) -- A motorcyclist reached speeds of up to 130 mph Friday morning during a police chase that traversed multiple freeways across Los Angeles and Orange counties.

After initially approaching the speeding suspect, authorities on the ground apparently backed off and switched to "tracking mode," following the motorcycle from Los Angeles Police Department and California Highway Patrol helicopters overhead. The blistering speeds at times outpaced AIR7 HD.

At about 9:30 a.m., the suspect transitioned from the westbound 10 Freeway to the southbound 5 Freeway, weaving in and out of light traffic.

The chase made its way into Orange County, where the motorcycle sped along the eastbound 22 Freeway in the Garden Grove area. The suspect exited onto surface streets and, perhaps low on fuel, pulled into a gas station in Orange.

Moments later, a CHP officer arrived in a patrol vehicle and took the suspect into custody without incident.

According to authorities, the pursuit began after a failure-to-yield call.

A motorcyclist reached speeds of up to 130 mph during a police chase that traversed multiple freeways across Los Angeles and Orange counties.