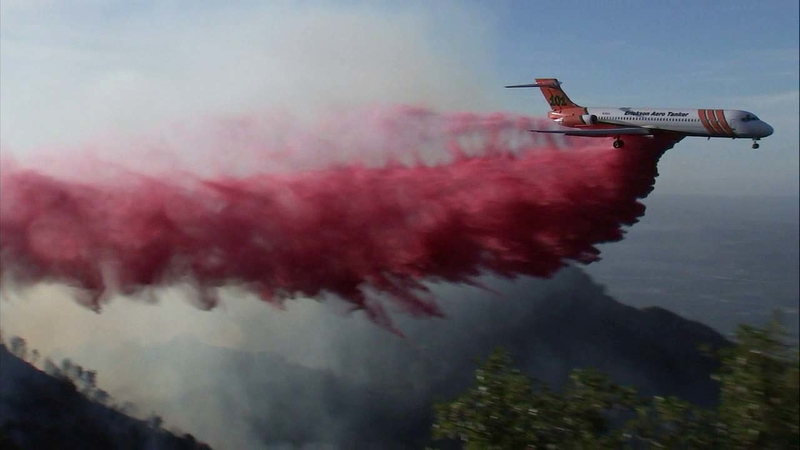 MOUNT WILSON, Calif. (KABC) -- A brush fire erupted near the Mount Wilson Observatory early Tuesday morning, prompting an evacuation of the historic facility as the blaze charred heavy brush down the hillsides.

The fire, which broke out shortly before 4 a.m., burned along the hills above Altadena, Arcadia and Pasadena.

Officials said the observatory was evacuated, and the fire is not burning near foothill residences. It was not clear how many people were inside the observatory at the time.

Chantry Flat and surrounding recreational cabins were also evacuated, and Red Box as well as Mt. Wilson roads were closed to the public.

Firefighters said the blaze has the potential to grow up to 600 acres.

The fire started near the top of the mountain and inched slowly toward communication towers near the Mount Wilson Observatory.

Crews from the Los Angeles County Fire Department and the Angeles National Forest battled the flames with water drops from helicopters equipped with night vision technology before sunrise.

"We hit it really hard last night with the aircraft that we were able to fly overnight...that helps slow the progression of the fire until we can get our hand crews down here," said Nathan Judy, with U.S. Forest Service.

Helicopters and fixed-wing aircraft attacked the fire aggressively, dropping water and Phos-Check to prevent the blaze from spreading.

Approximately 500 firefighters were battling the brush fire. They were aided by light winds and cool morning temperatures.

The cause of the fire was not known. No injuries were reported.

The glow of flames and smoke was seen across the Los Angeles basin, surrounding valleys and as far away as Orange County.

Mount Wilson celebrates the 100th year anniversary of the telescope on Nov. 4.

For the first half of the 20th century, Mount Wilson was the most famous observatory in the world. The discoveries made at Mount Wilson revolutionized our understanding of our place in the universe.
Report a correction or typo
Related topics:
mount wilsonlos angeleslos angeles countyevacuationbrush firefirewildfirefirefighters
Copyright © 2021 KABC Television, LLC. All rights reserved.
TOP STORIES
Lancaster: Father arrested in children's deaths to appear in court
Woman detained after running onto tarmac at LAX
11-year-old arrested for carjacking of police sergeant's wife
Search for Heidi Planck leads detectives to Castaic landfill
Woman left at hospital after night out in LA taken off life support
Tiger Woods says his days of being a full-time golfer are over
Ideas for donating, volunteering this Giving Tuesday
Show More
Barbados bids farewell to British monarchy, becomes republic
Former guardian of Turpin children to cooperate with investigation
San Bernardino Co. sheriff opens up about current state of jails
Lincoln Riley introduced as new USC football coach
CDC recommends vaccinated adults get booster amid omicron spread
More TOP STORIES News