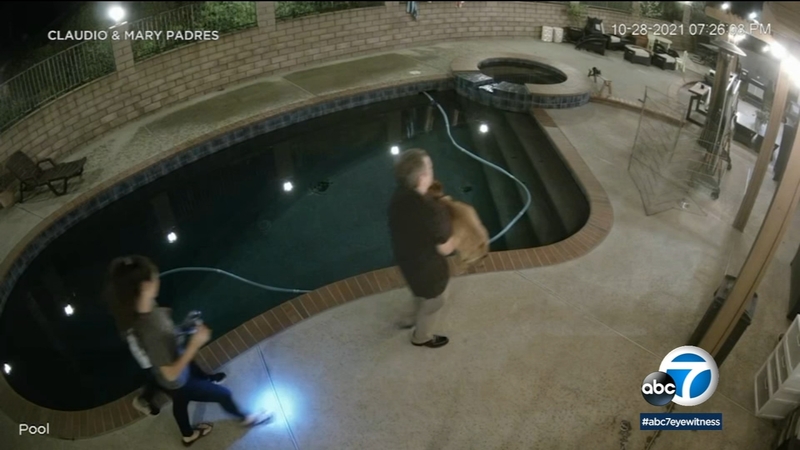 LA VERNE, Calif. (KABC) -- It was night of danger, courage and loyalty for a La Verne family: Their dog confronted a mountain lion to protect his owners, and the humans returned the favor by rescuing their beloved pet.

A few days before Halloween, Mary Padres heard her dogs barking furiously in the backyard.

"I freaked out as soon as I saw it," she said in an interview with ABC7, "and I screamed 'Mountain lion!'"

The family dog Rocky, like his namesake, did not back down from a fight. He took off after the cougar.

"And so Rocky ran up the hill and was gone," Claudio Padres said. "We tried to call him back, but he wasn't' responding. We couldn't find him."

The National Park Service has captured its 99th study mountain lion in the Santa Monica Mountains.

The family said the mountain lion was huge. It may have been the one that was recorded up-close on home surveillance video at a nearby home both before and after the incident.

It was easily three times the size of little Rocky, who chased it away. But where was Rocky?

The Padres family went looking for him. They could hear the mountain lion in the bushes. They forged ahead, through darkness and danger -- and found him.

Claudio Padres carried the badly wounded dog into the house.

"He had blood all over him and bite marks," he said. "The mountain lion basically dragged him by the head. He had a lot of bite marks on the head and the throat."

One of the bite marks, on Rocky's skull, was so deep that his brain was visible. But he survived and is recovering from his wounds.

Why did the Padres family risk their safety to save their dog?

"He fought for us," Mary Padres said.