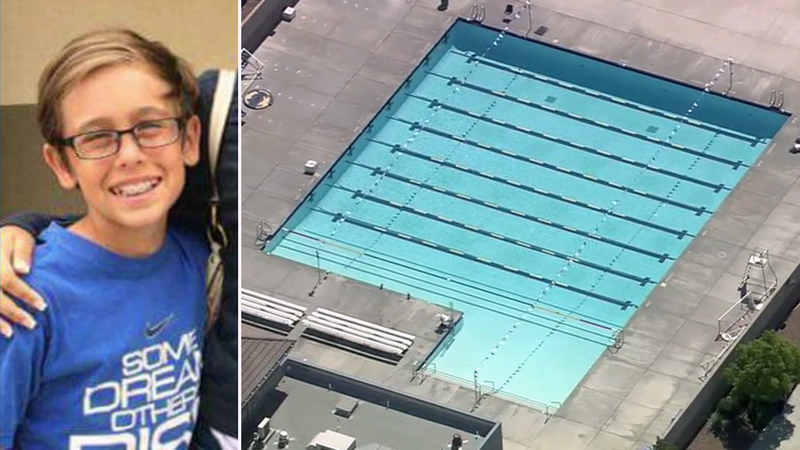 MURRIETA, Calif. (KABC) -- The family of a Murrieta seventh-grader who drowned while participating in a school-sponsored event reached an $11 million settlement with the district.

Alex Pierce's family held a news conference Tuesday to discuss the safety procedures that will be implemented as a result of the settlement.

"This can happen to anybody," his mother Sabrina Pierce said, fighting back tears. "You have to make sure that CPR is done if there is a water accident. If CPR was done, we wouldn't be here right now."

The 13-year-old from Dorothy McElhinney Middle School drowned in 2016.

Pierce had been swimming in the deep end of the pool when he slipped beneath the water unnoticed.

According to the family's attorneys, he remained submerged almost two minutes before several of his seventh-grade classmates spotted him, dove under and retrieved him, bringing him unconscious to the surface.

Two student lifeguards, both teenagers, then placed Pierce on a backboard, and for the next seven minutes, floated him around the pool, unable to decide what to do next.

The Murrieta Valley Unified School District apologized in a letter to the Pierce family.

"We recognize that no amount of money will compensate the Pierce family for the loss of their son," the letter said. "The settlement was not an admission of liability or fault on the district's part. Rather, it was a mutually acceptable agreement which acknowledges the unfortunate circumstances that led to this tragic accident."

Pierce's family alleged that the chief swim and dive coach for Vista Murrieta High School, Keith Good, who was responsible for supervising the nine amateur lifeguards on duty, stood by and did not make any effort to initiate CPR.