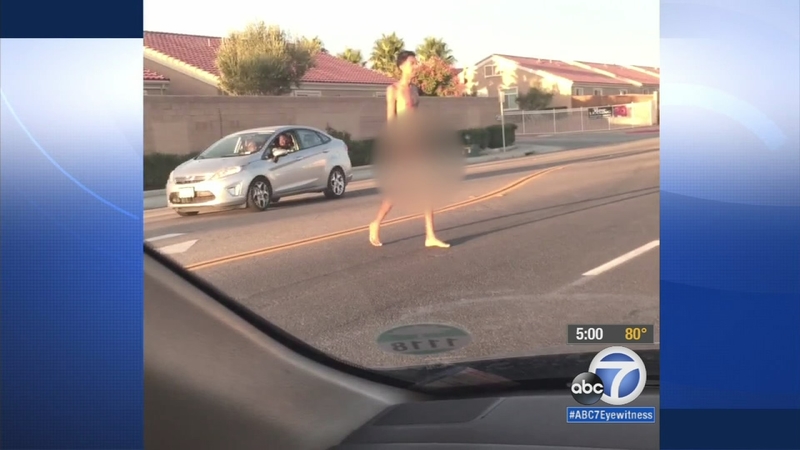 VICTORVILLE, Calif. (KABC) -- Authorities arrested a naked man after they say he terrorized a Victorville neighborhood Monday. He allegedly attacked a woman and chased kids down the street while they walked to school before trying to carjack at least two people.

Daniel Anglin, 19, of San Bernardino was arrested at about 7 a.m. near the intersection of El Evado and Seneca roads.

Investigators learned the suspect broke into an apartment and was confronted by the owner before fleeing, according to the San Bernardino County Sheriff's Department.

Lydia Lopez says when she saw the naked man, the first thing she did was call 911. Then, after she hung up, she started shooting video.

The video shows he put his hands on one woman. Lopez says it looked like he tried to get into her car.

Then, as she pushed him away, the suspect appeared to try to kiss her. Then, another man got involved.

He says at one point, the naked man was chasing children down the street; kids who were walking to school. Just a few seconds later, a sheriff's deputy arrived.

"He tells him three or four times to get to the floor," the witness said. "He starts pursuing the deputy. The deputy strikes him in the legs, which did not faze him."

The witness says that's when the man tried to get into the deputy's SUV. Sheriff's officials say the suspect tried to steal the patrol vehicle.

You can't really see that from the video, but a few seconds later the deputy used a Taser. That's when the naked man collapsed into the bushes and was taken into custody before being treated by paramedics.

Lopez posted the video on Facebook, wanting to warn parents about what happened.

She was surprised by people who thought the deputy was out of line. She says while the use of the baton might look excessive, deadly force was not used.

"He did his job, and I think he did it well," said Lopez.

"Thank God he didn't hit him in the head, then I would look at it different, but he hit him on the lower part of the body," Lopez's father said. "He did what he had to do, so I have to back up the police officer 100 percent."