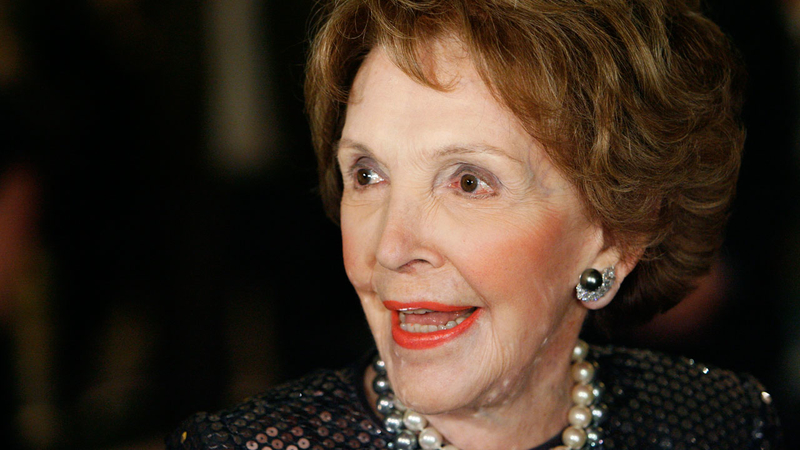 Reagan married her husband former president Ronald Reagan in 1952. The couple remained together until his death from Alzheimer's disease in 2004.

She will be buried next to her husband at the Ronald Reagan Presidential Library in Simi Valley, according to her spokesperson.

Details on a finalized date and time were not immediately released, but sources at the library said about 1,000 people, including heads of state, former presidents and other dignitaries, will be invited to the service.

Library officials said members of the public who would like to pay their respects will have an opportunity to see Nancy's coffin at the library in coming days.


In lieu of flowers, she had requested that people make contributions to the library and its foundation at www.reaganlibrary.com.

As news of Reagan's death hit social media, many paid their respects.

I am saddened by the passing of my step mother Nancy Reagan...She is once again with the man she loved.God Bless...
...

Nancy Reagan was one of my heroes. She served as First Lady with unbelievable power, class and grace and left her mark on the world. (1/2)

She's with her Ronnie now, but those of us she left behind will miss her dearly. (2/2)

Nancy's strength of character was legendary, and her advocacy—especially for Alzheimer's research—was tireless. Praying for her family. -H

President Barack Obama and First Lady Michelle Obama said they had the fortune to benefit from Reagan's "proud example, and her warm and generous advice" on how to prepare for living in the White House.

"Our former First Lady redefined the role in her time here," their statement continued. "Later, in her long goodbye with President Reagan, she became a voice on behalf of millions of families going through the depleting, aching reality of Alzheimer's, and took on a new role, as advocate, on behalf of treatments that hold the potential and the promise to improve and save lives."

Reagan's daughter, Patti Davis, posted a statement about her mother's passing stating she feels "comfort in feeling surrounded by gentle thoughts and kind wishes, often sent out by strangers."

"Nancy Reagan was totally devoted to President Reagan, and we take comfort that they will be reunited once more. George and I send our prayers and condolences to her family," the statement said.

"Laura and I are saddened by the loss of former First Lady Nancy Reagan. Mrs. Reagan was fiercely loyal to her beloved husband, and that devotion was matched only by her devotion to our country," it said. "...Laura and I are grateful for the life of Nancy Reagan, and we send our condolences to the entire Reagan family."

Reagan was born on July 6, 1921 in New York City and was raised in Chicago. She started her career as an actress in stage, movies and television, which eventually led to her meeting her husband.

The Ronald Reagan Presidential Library in Simi Valley shut down Sunday to prepare for the funeral of former first lady Nancy Reagan.

After Ronald Reagan became California governor in 1967, Nancy began visiting wounded Vietnam veterans and began projects focusing on POWs and servicemen missing in action. She would often visit hospitals and homes for the elderly, as well as schools for physically and emotionally handicapped children.

When her husband became president in 1981, Reagan then began focusing on fighting alcohol and drug abuse among the youth with her "Just Say No" campaign.

At the end of Ronald Reagan's presidential career in 1989, Nancy created the Reagan Foundation as a way to continue to educate people about the dangers of substance abuse.

She is survived by her two children Patti Davis and Ronald Prescott Reagan as well as her brother Dr. Richard Davis.