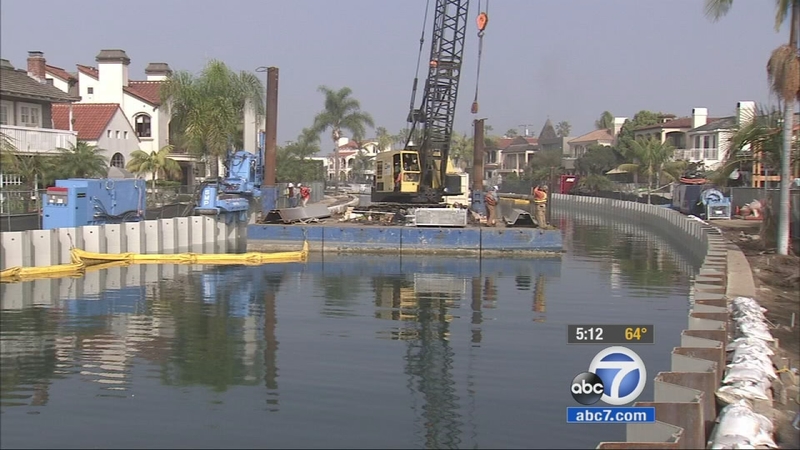 NAPLES, LOS ANGELES (KABC) -- Naples Island in Long Beach has been turned into a construction zone as crews repair a crumbling seawall to withstand an earthquake.

The waterways that wrap around the neighborhood have been around since the turn of the century. But those concrete canals are deteriorating fast.

Long Beach Mayor Robert Garcia said the city is planning to build new seawalls around the entire island, which is located on the southeastern edge of the city.

Phase one of the ambitious project is focusing on a 1,000-foot section of the Rivo Alto Canal, where the seawall is particularly vulnerable.

"This part of the canal needs the most support. So we don't ever want to risk there being any issues, particularly for the homes here, but also for the public because in many ways this is a public walkway, a boating walkway," Garcia said.

A construction crane floats atop a barge as 47-foot pieces of stainless steel are nailed into the ground, reinforcing the older concrete walls.

"It's a challenge logistically with the size of the equipment, the size of the repairs that we are doing," said Rafe Holcombe of Tetra Tech, Inc, the construction company responsible for fixing the walls.

The concrete wall was built in the 1930s, and the new seawall should last about 70 years. The work started in November and the sidewalks along the canal have been closed since then.

The disruptions have caused a few inconveniences, but most Naples residents said the retrofit is long overdue.

The first phase will cost an estimated $9 million and should be completed by mid-June.