Indigenous students can face large education gaps. Here's how one school is trying to close them

A mix of culture clashes and social risk factors can hold Indigenous students back. The goal at this local school? Catch them up.
KABC
By Christiane Cordero and Grace Manthey 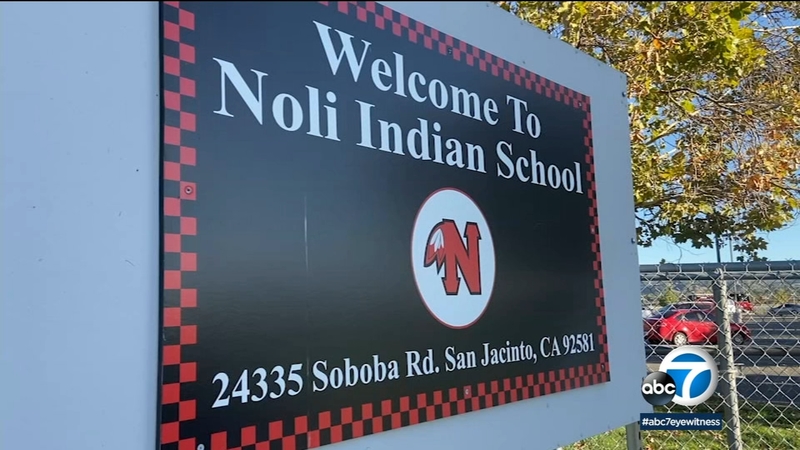 Nevarez, 17, wants to get a degree, go back to teach in her community and become a make-up artist on the side.

Briones, 17, wants to start her own ultrasound technician practice.

Vega, 16, wants to go into the medical field like her mother.

But despite these different goals, these teens have a lot in common. They are all Indigenous students at Noli Indian School on the Soboba Indian Reservation in Riverside County.

They have all felt the struggles that come with being Indigenous students.

Nevarez said she has experienced stereotypes and racism at other schools she's attended.

"I've been told that what I was saying about my Native Heritage, that I know because it was passed down to me from my family, was lies because it didn't say so in the curriculum," Nevarez said.

Contreras said many people do not even know when they are being culturally insensitive.

"We have a lack of education on Native people, and that's due to our school systems, a failure to do that," he said.

"Our history should be taught throughout the curriculum so that the students who are going to public school know whose land they're occupying, so that they know not to be disrespectful and that these spaces are sacred and that they're educated on our topics," Nevarez said.

Taking a chance on kids

The lack of education on Native American culture is one of the reasons experts say Indigenous students tend to fall behind in school.

Numbers from the 2018-2019 school year show the Native American graduation rate was about 75%, compared to about 85% for all students. 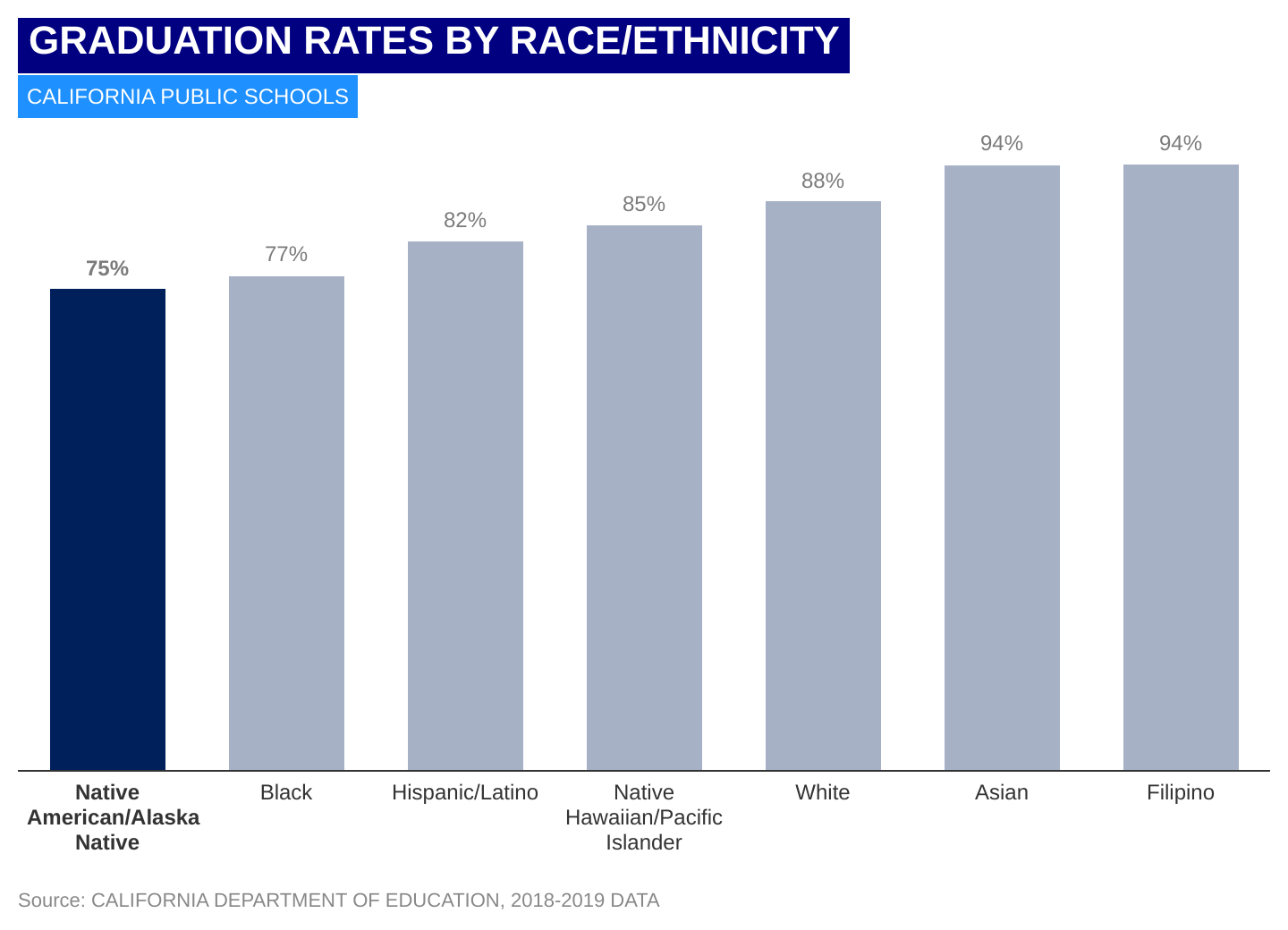 Just 31% of Native American students met state university requirements in that same year, compared to about half of all students. 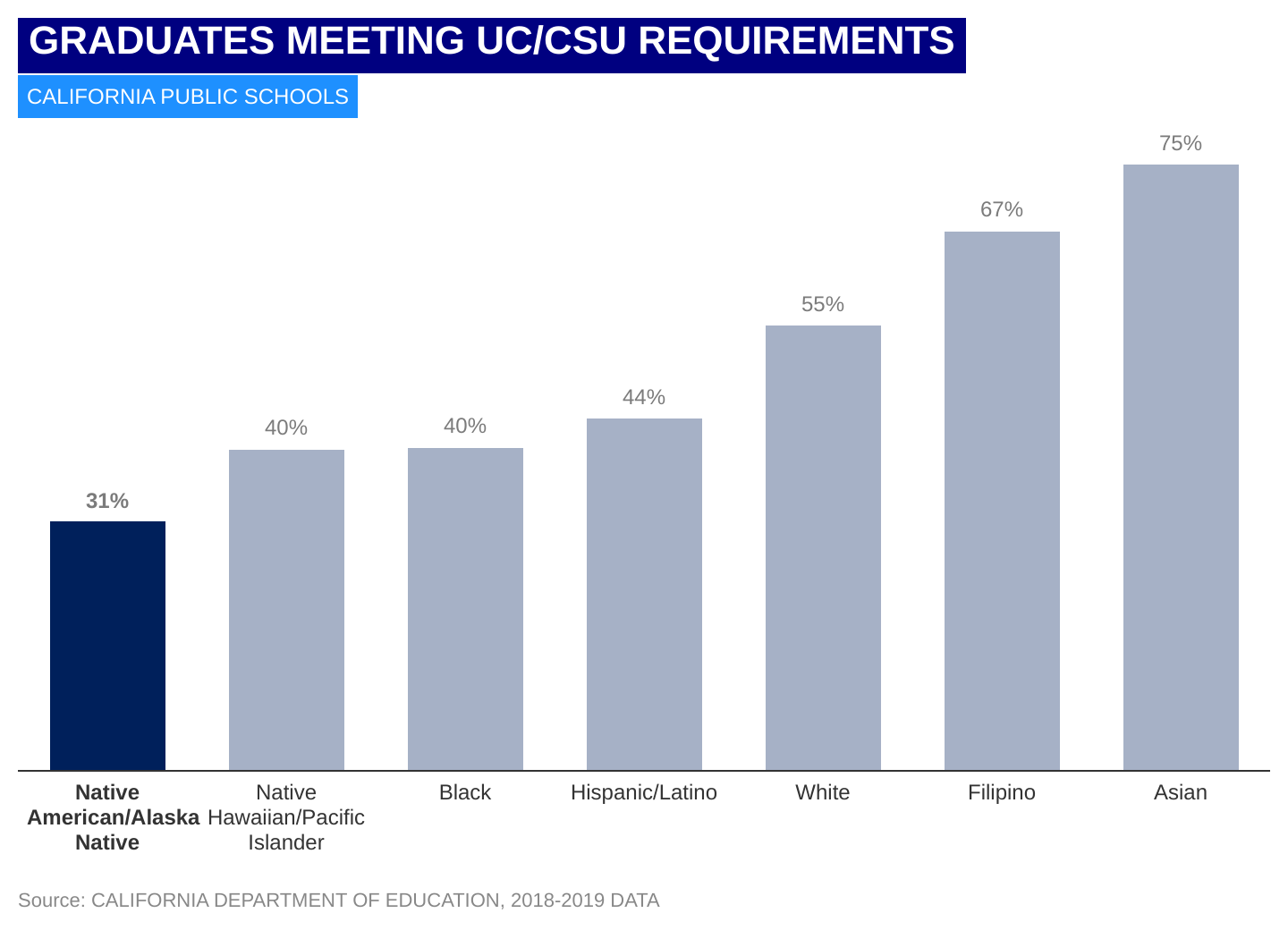 About 38% of Native American students met or exceeded the state standard for English, and it was just 27% for math. For all students, the rates were 51% for English and about 40% for math. 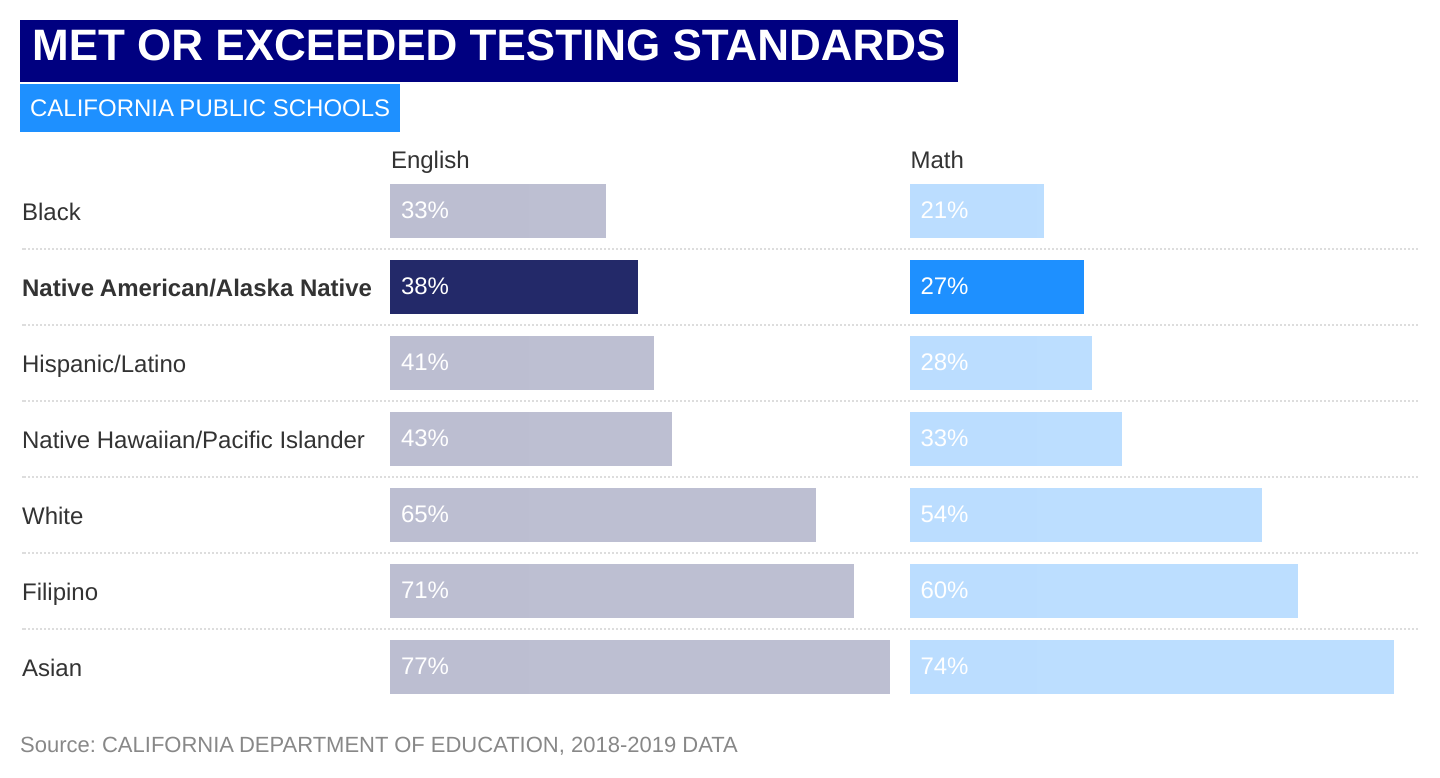 Noli is not included in this data because it's not a public school. It is funded by the Bureau of Indian Education and overseen by the Soboba Tribe.

Noli principal Donovan Post, who is also part of the Soboba Band of Luiseño Indians, said the graduation rate fluctuates between about 85% to 95%. He said because of the small class sizes - graduating classes are between 10 to 18 students - if one student doesn't make it, that can really skew the rate.

Even with a relatively high graduation rate, data from the Bureau of Indian Education show more than 80% of students fell into the lowest performance tier on both math and English tests at Noli in the 2018-2019 school year.

"Those numbers don't shock me, we understand where they're at," Post said.

Students can start at Noli as early as sixth grade, and Post said the school's goal is to close achievement gaps by the time students hit high school age.

"The school was built to help Native American kids who aren't finding any kind of success in the public school system. So, we take the chance on kids who are behind and things like that," Post said.

While he said testing isn't the only way to measure student success, it's still important to look at.

"The staff, the team, we need the data so we can see where we're at, the adjustments that need to make to the curriculum, where we need to put our budget money," Post said.

That lack of research is a problem, said Joely Proudfit. She is Luiseño/Payomkowishum and is the director of the California Indian Culture and Sovereignty Center and the department chair of American Indian Studies at Cal State San Marcos.

"How do we know what's happening in K through 16 education in California if we're not collecting the data on it? If we see the numbers as statistically insignificant?" Proudfit said.

"And the needs are in making sure that we gather the data to support our students. So that's why the California Indian Culture and Sovereignty Center invests in putting out data," she said.

CICSC's reports point to some reasons why Native American students tend to underachieve in school. One of them, according to Proudfit, is "cultural insensitivity, the lack of cultural sustaining curriculum and pedagogy."

In a statement, a spokesperson for the California Department of Education said that it is "committed to closing opportunity and achievement gaps for all student groups, including Native American Students."

According to the statement, State Superintendent Thurmond hosted an American Indian Education Oversight Committee meeting over the summer, the first since 2017. The AIEOC's purpose is to promote educational and cultural understanding as well as coordinate tribal consultation, cultural standards and curriculum resources.

"It is important for Native American/Indigenous students to see themselves reflected in the materials they are studying," the statement said.

At Noli, middle school English teacher Richard Moreno, from the San Juan Pueblo in New Mexico, works with the cultural department at the school and picks Native American literature that is California-based before teaching from other books.

"I believe that the students need to know their history here in the state before we begin to learn other histories of Native Americans throughout the country," he said.

Moreno said these are books like Island of the Blue Dolphins, and Zia, which are set in areas of California.

"Some of the students are from there, and they know what the book is talking about. So, the engagement then becomes 1,000%," he said.

Noli was able to bring in one of the authors of a book the students read to speak to the whole school, Moreno said.

And the students agree.

"It gives us a sense of identity, of who we are," Abbie Nevarez said.

The reason, according to Anthony Contreras, is "it reconnects us with our mind, our body and our spirit. And with the earth."

Faith Vega said it's important to "connect back to our ancestors."

Moreno said the small class sizes at Noli provide students who are behind with a more individualized education. That's important because many students come to Noli dealing with what Moreno calls "risk factors," like trauma or family dysfunction.

"Until you address those risk factors, there's no moving forward academically," Moreno said.

The awareness of Noli teachers is obvious to students. Faith Vega said that her teachers "get know us, and they like to get to know us."

Abbie Nevarez admitted that when she first started at Noli, it was "not a good time" in her life.

"But coming here, having that relationship with actual Native teachers, them actually guiding me through like, a lot of different things, it's really helped a lot," Nevarez said.

Principal Post said for roughly 150 kids in the school, Noli has three academic counselors and two full-time teachers dedicated to just reading, plus educational technicians who work in the classroom with a teacher to help kids get one-on-one time.

Moreno said they are always looking for more Native teachers to work at Noli.

"If there's any Native American individuals that are credentialed that want to teach, we need you here, we want you to come here. It's essential. It is something that would make the school better," he said.

Parents are vital to student success at Noli, according to Post. Many parents don't know what's available to their students after high school.

"It's just opening the doors to show the parents what's available...those same doors that were never really opened for them," Post said. "And if they would have been open for them, if there was a smaller school with, you know, a group of people who are dedicated to it, then maybe the dreams they had would have been a reality."

Teacher Richard Moreno said one of the "silver linings" to virtual learning during the pandemic was the increase in parental engagement. Parents reach out to teachers now and video calls have made communication easier between parents and teachers.

"We just became stronger as a team. They understand what we're trying to do here at the school now because they've had an exposure to the lessons and to the time that's committed to each one of those students that they have at home," he said.

Many students say they want to come back to their communities after college.

"I'm going to be giving back to my tribe, if I come back and provide them with something that I learned in I did, and I accomplished," said Iyana "Tot" Briones, who wants to start her own ultrasound technician practice.

Abbie Nevarez and Anthony Contreras both want to come back and teach. Contreras specifically wants to teach American Indian Studies. He said they have an "amazing" culture teacher at Noli.

"She's not gonna be here forever. And I think that's an opportunity for me to go out and...learn more about American Indian history and learn my language and other surrounding languages in Southern California," he said. "So, I can come back to my community and teach them their culture so it can be revitalized and passed down to the next generations."

Above all, the students hope to bring awareness to Indigenous people.

"And that we're not only brought up during November for Native Heritage Month and that were brought up all the time. Because we're here always, we've always been here. And we matter," said Nevarez.

Contreras said he hopes people see them as less of a stereotype in the future and that they educate themselves on Native people and culture. To which Nevarez added: