Matt Pieciak was surrounded by friends and family, drinking some beers, playing some cornhole and trying to catch some fish
By CNN 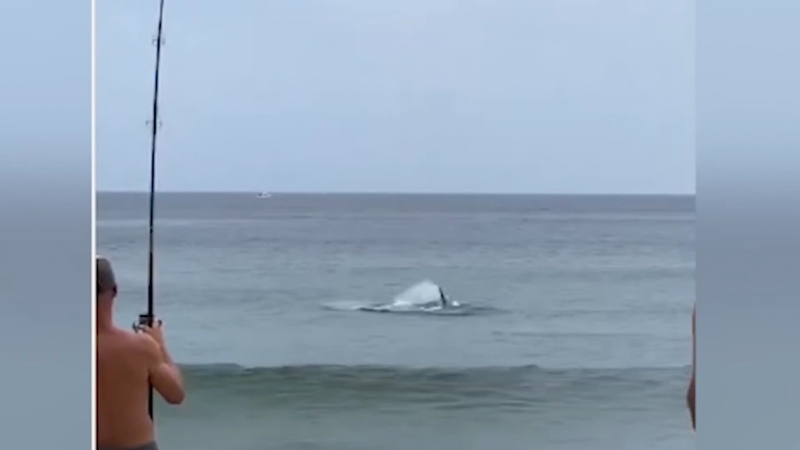 ORLEANS, Mass. -- A Massachusetts man nearly caught a great white shark on the beach over the weekend.

It started off as an average day on Nauset Beach, located on Cape Cod in Orleans, Massachusetts, for Matt Pieciak, surrounded by friends and family, drinking some beers, playing some cornhole and taking a chance at catching some fish.

But mid-game, he spotted something in the water behind his opponent, WCVB reported.

"I just saw the rod kind of start to go off behind him, the tip of it was bending, and from there we just kind of ran over to it," Pieciak said.

Pieciak politely asked his cousin to "hold my beer" before realizing he'd hooked a great white.

Jordan Prushinsk was swimming with her family when she limped out of the water bleeding from the leg.

"Right when the line went tight you could see a big gray shadow, and we all immediately knew it was probably a great white," he said.

Not only the shadow, but a tail fin and a dorsal fin, exciting beachgoers and drawing a crowd.

"He or she broke off pretty quickly, and that was it, disappeared into the depths of the ocean I guess," Pieciak said.

Pieciak believes this all began when the shark went after a bigger fish that was on his bait.

"There is no chance the hook I was using for the fish would have even grabbed the shark," he said.
Report a correction or typo
Related topics:
pets & animalsmassachusettsbeachessharksu.s. & worldfishing
SHARKS
Florida shark attack caught on video
Video shows shark swim next to 11-year-old girl at Myrtle Beach
Juvenile great white sharks spotted off Pacific Palisades coast
Pa. girl speaks out after shark encounter in Ocean City, Maryland
TOP STORIES
Woman safe after video of possible abduction in Bell Gardens
Heat advisories issued for most of SoCal on first day of fall
California struggles to conserve water amid historic drought
Search resumes for Brian Laundrie in Gabby Petito case
FDA expected to authorize limited wider use of Pfizer booster
Who is running for mayor of LA? Here are the top contenders
Anti-Black bias events most prevalent in 2020: CA attorney general
Show More
Suspects in Kristin Smart disappearance could face trial
Willie Garson, known for 'Sex and the City,' dies at 57
Mega Millions ticket worth $432 million sold in New York
Officials: Many Haitian migrants are being released in US
Paychecks delayed for hundreds of Santa Ana school district employees
More TOP STORIES News