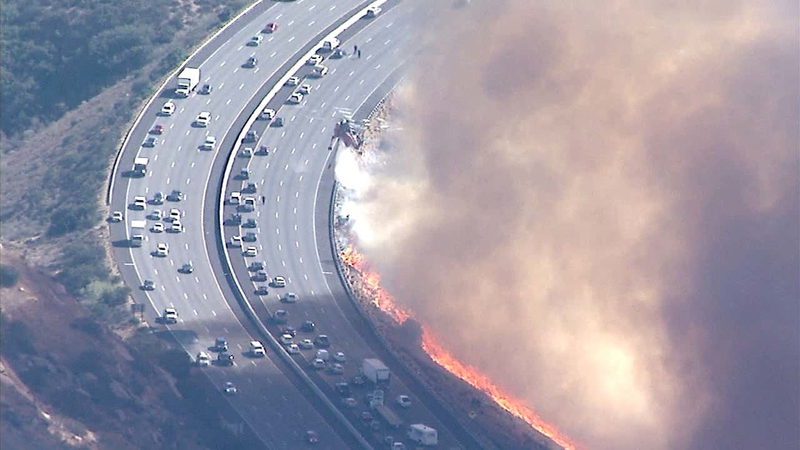 SIMI VALLEY, Calif. (KABC) -- A new brush fire sparked along the 118 Freeway in the Santa Susana Pass Monday, scorching approximately 186 acres before firefighters got the flames under control.

Firefighters from Ventura and Los Angeles counties responded to the blaze, with aerial units dropping water on the freeway as the flames drew close to passing vehicles.

The California Highway Patrol's Moorpark division tweeted that there was a full closure of the eastbound 118 Freeway at Yosemite Avenue, urging motorists to use the 126 Freeway or the 101 Freeway as an alternate route.

2 lanes of E/B SR118 are now open, the remainder of the E/B lanes will remain blocked by fire personnel as they work to contain the #peakfire. Please slow down and expect delays as you approach this area. ALL W/B SR118 lanes are open. 2 eastbound SR118 lanes open @CaltransDist7 pic.twitter.com/R8dHXMqFIp

Fire officials ultimately sized up the fire, dubbed the "Peak Fire," at approximately 186 acres. The blaze was situated outside the Woolsey Fire zone and ran uphill off the 118 Freeway near Rocky Peak Road before the flames were extinguished, according to authorities.