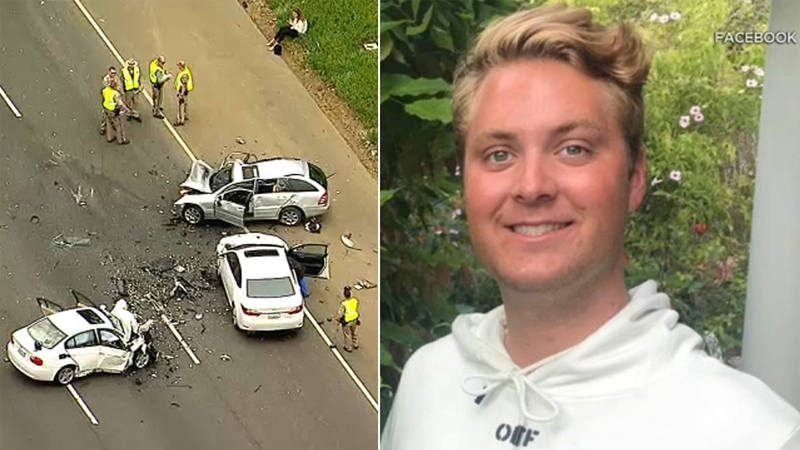 According to a California Highway Patrol incident log, the head-on collision was reported shortly before 9 a.m. near Campus Drive. Witnesses told CHP investigators that the man behind the wheel of a silver Mercedes-Benz station wagon reached speeds of up to 100 mph while driving against traffic shortly before the violent pileup.

That motorist, who was critically injured in the incident, was later identified by authorities as 23-year-old Luke Fitch of Newport Beach. He was transported to OC Global Medical Center in Santa Ana.

A 65 year old woman is dead after @CHP_OC says a 23-year-old #NewportBeach man driving recklessly at high speeds entered highway 73 northbound at the Birch St. offramp going the wrong way, hitting four cars including the BMW of the deaceased driver. 73 N down to 1 lane @abc7 pic.twitter.com/BFQyKm0CU1

A woman was pronounced dead at the scene after the white BMW sedan she was driving was hit head-on by the speeding Mercedes. She was later identified by family members as 65-year-old Arda Gulesserian.

The husband of the victim said he's in complete shock over the loss of his wife.

Investigators are looking into whether the crash was intentional.

"Based on the reports of him driving recklessly beforehand and the way he got on, that's why we are looking into it as a possible intentional act,'' CHP Sgt. Todd Kovaletz told ABC7. "So as far as intoxication goes, right now it's obviously something that's suspected, but until we can get there and interview him and talk to the hospital, it's too early to say one way or the other."

Neighbors of the suspected wrong-way driver described him as a "nice" young man.

Three northbound lanes were closed on the 73 as an investigation and cleanup operation were conducted at the scene. All lanes were expected to be open in the late afternoon.
Report a correction or typo
Related topics:
trafficnewport beachorange countytraffic fatalitieschpwrong waycalifornia highway patrolspeedingmercedes benzcrash
Copyright © 2022 KABC Television, LLC. All rights reserved.
TOP STORIES
LA County could hit 'high' COVID level in July, prompt return of masks
Here's what to know about the end of CA's eviction moratorium
California late start law aims to make school less of a yawn
LAX expected to be second busiest US airport over July 4th weekend
WNBA's Brittney Griner's trial starts in Russia court
Woman searching for brother reported missing in Redondo Beach
How to stream ESSENCE Fest live on Hulu
Show More
Long Beach softball team headed to state championship
Lawyer: Nipsey Hussle lifted up neighborhood he was gunned down in
Spike in mass-overdoses, teen deaths due to fentanyl, DEA says
Apple's newest CarPlay feature will make buying gas easier
How to save money when buying a new car in an inflated market
More TOP STORIES News