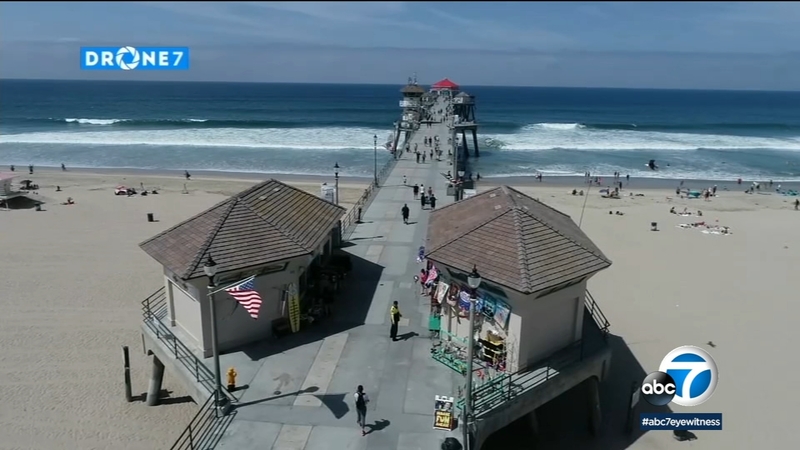 NEWPORT BEACH, Calif. (KABC) -- Orange County's beaches draw in millions of people every year and the piers that stretch out over the ocean have become focal points for visitors.

In Newport Beach, Councilwoman Diane Dixon said changes are taking shape on the pier ahead of the busy summer season, including the demolition of an old restaurant building at the end of boardwalk.

"It hasn't been a restaurant for over ten years. It's clearly an eyesore," she said. "There hasn't been any maintenance of it. There's no one occupying it and so... I've been on the council eight years and from day one people have said, 'What are we doing about that restaurant?'" Dixon said.

In addition, she said no one had showed interest in taking over the building.

"We did try to get some restaurant companies to come in but it has logistical issues. It's a long way out to the end of the pier," Dixon said.

At Huntington Beach's pier, the building that once housed the iconic Ruby's Diner remains empty after the restaurant permanently closed its doors in February 2021.

It's the end of an era for an iconic restaurant on the Huntington Beach Pier. Ruby's Diner is closing its doors permanently on Friday.

Jennifer Carey, public affairs manager for the city of Huntington Beach, said the city owns the building but a new ownership group, RAV, LLC., bought the lease and assets for the building from Ruby's through bankruptcy proceedings.

Carey said RAV, LLC. has identified a restaurant operator and is in the process of formalizing plans to open a new eatery in the building with a new and updated design.

Dixon said these small changes to the pier are just a small part to an even bigger plan they envision for McFadden Square, which hasn't been improved in 40 years, next to the beach.

She said city leaders are looking at the age of the pier, which needs to be refurbished or updated.

She said they are in the early stages of the envisioning process including expanding the boardwalk, addressing parking issues and looking into the possibility of putting a restaurant halfway down the pier.

The demolition of the old restaurant building on the pier is expected to be completed by Memorial Day.