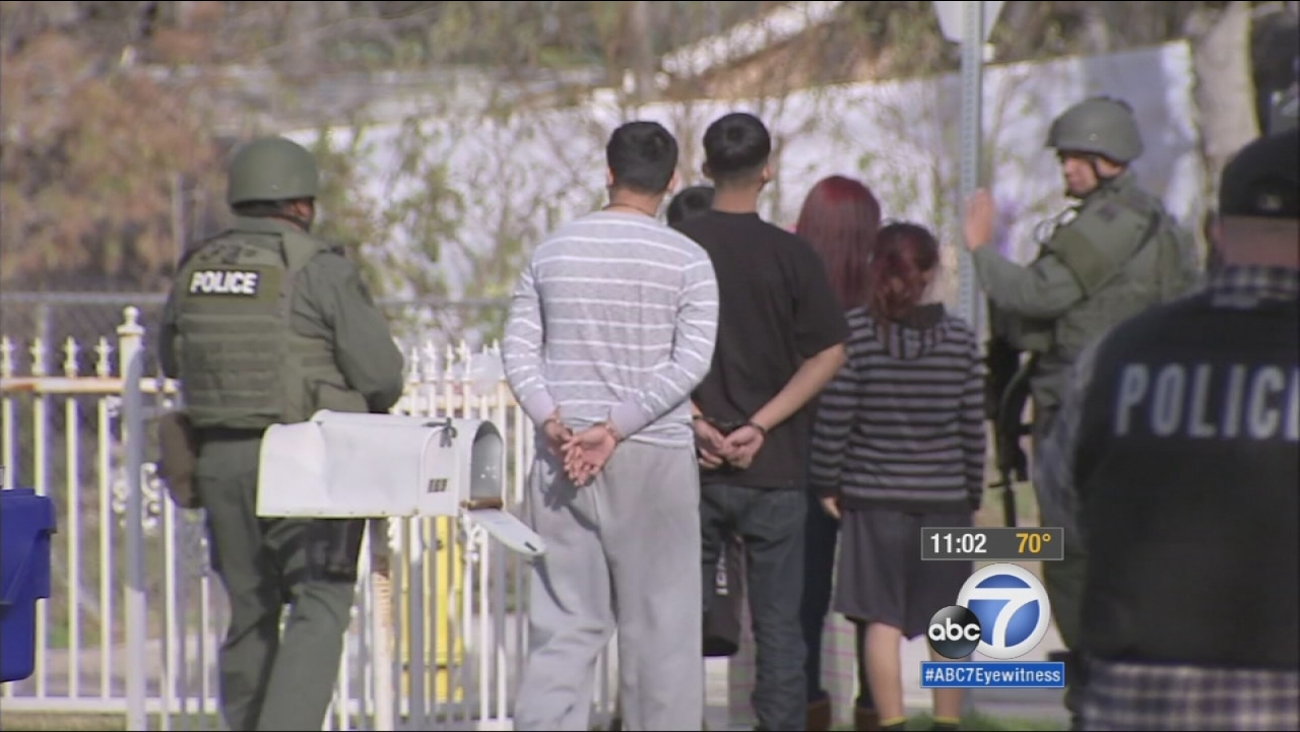 Suspects are shown being led out of a home following a standoff in San Bernardino on Thursday, Jan. 22, 2015. (KABC)

The situation started to unfold around 5 a.m. at a home on the 1200 block of W. 17th Street, where officers tried to contact a felon who they believed was armed.

SWAT officers surrounded the home after the people inside refused to cooperate with law enforcement. Authorities learned there were six people inside the home ranging in ages from 15 to 75.

When officers finally gained entry into the home, they found a stash of high-powered weapons as well as a pound of methamphetamine. Investigators said the weapons recovered at the home included two military-style assault rifles, a grenade launcher and ammunition. 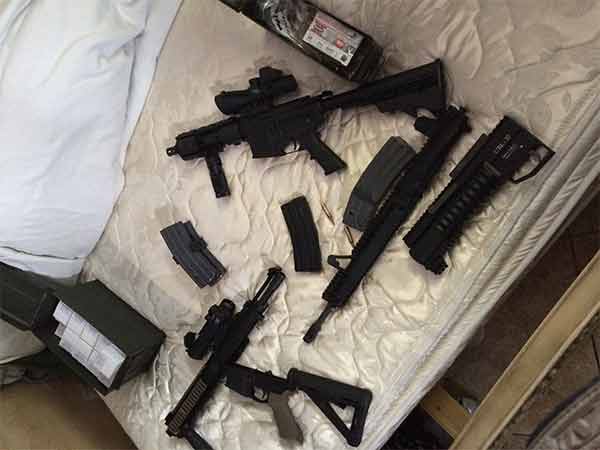 Weapons were discovered inside a San Bernardino home following a standoff on Thursday, Jan. 22, 2015.

All individuals exited the house without incident shortly after 9 a.m.

Fontana police said three adults - two men and one woman - were arrested for narcotics and weapons charges. Three others, including a grandmother in her 70s, were questioned and released. Investigators identified the primary suspect as 20-year-old Jorge Alvarez. The children inside the home were released to their parents, who were not inside the house at the time of the barricade.

Ten area homes were evacuated as a precaution.

"I woke up around 5 o'clock and my mom woke me up, and I went in the living room, and they tell me they were raiding someone's house. I looked and it was my neighbor's house. I was just shocked," said area resident Justin Serna.

Neighbors said police have been called to that home before.

The San Bernardino Police Department and the Inland Valley SWAT team, comprised of officers from the Colton, Fontana and Rialto police departments, were involved in the investigation.

Outdoor dining may become permanent option in LA
Riverside County moved back to purple tier in CA reopening framework
SF moves into yellow tier, non-essential offices can reopen
Teen mom's journey to becoming one of LAUSD's chief educators
Disneyland fires back over CA's 'arbitrary guidelines' for reopening
Show More
Vanessa Guillen's death was 'in line of duty,' Army says
Fruit vendor out of a coma after being struck by SUV
VIDEO: Delta passenger slaps flight attendant on plane
Firefighter surprises daughter after deployment to CA wildfires
Here is what the court system looks like during the pandemic
More TOP STORIES News