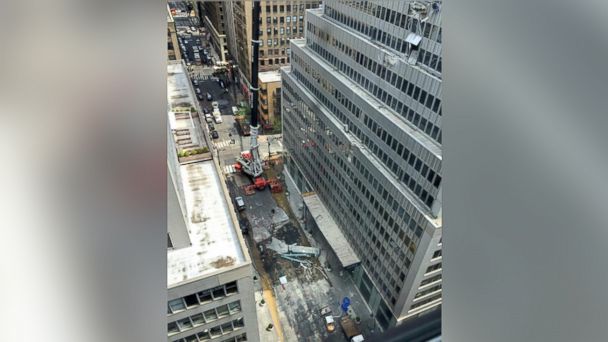 A large load fell from a crane on a 30-story New York City building this morning, injuring 10 people on the street below, officials said.

The incident occurred at a building on Madison Avenue near 38th Street, when a cable pulling up large equipment -- described as an air-conditioning unit -- broke from the crane, city officials said.

Two workers and eight passersby were hurt, Mayor Bill de Blasio said. All injuries appeared to be non-life-threatening, he said.

"Obviously a serious incident but thank God at this moment, no life-threatening injuries," de Blasio said. "Thank God this incident occurred at an hour of the day on a weekend when there were not too many people around."

The Building Department is looking into the incident, a city official told ABC News. The project at the building has had a permit since February, and there were no complaints or reports of problems, a building department official said.

"The crane was in good working order," NYC Buildings Department Commissioner Rick Chandler said. "We do track all cranes around the city so you should know that. We'll be investigating that specific device as thoroughly as possible."