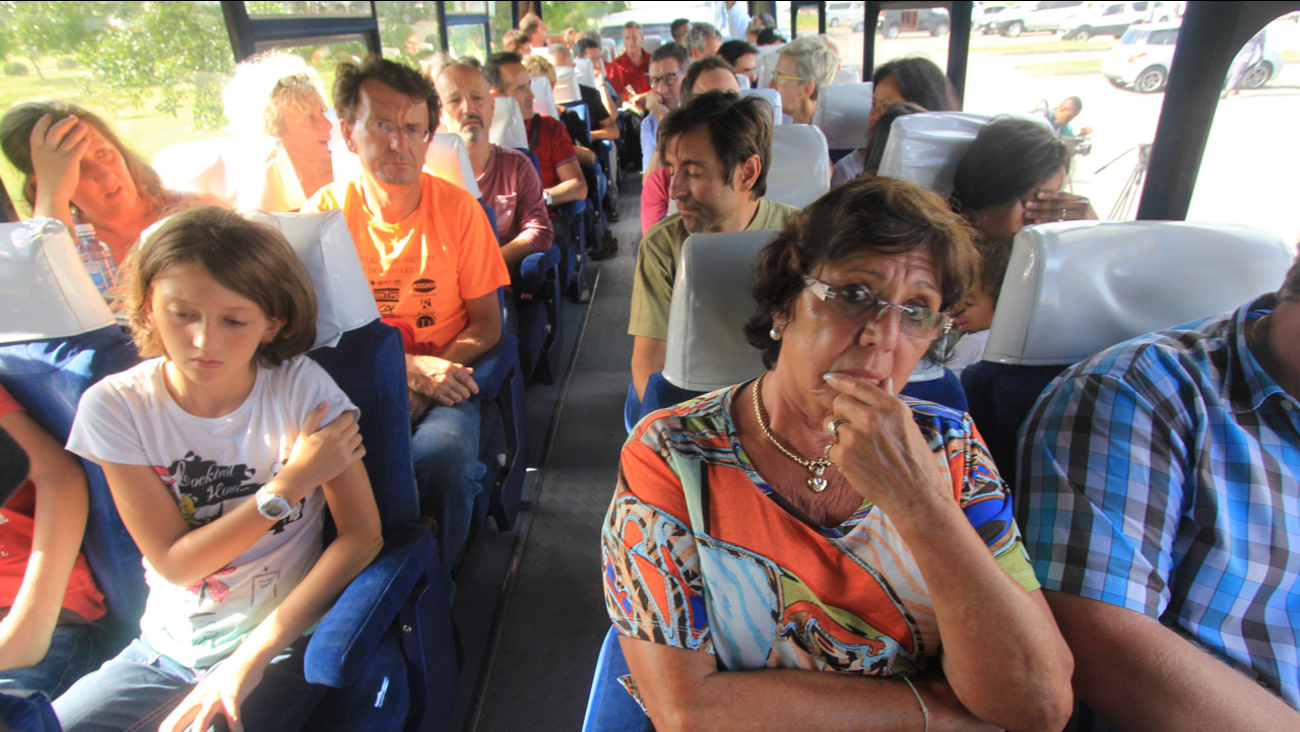 Passengers of an Air France plane which made an emergency landing at Moi International Airport ride on a bus after being evacuated from the plane in Mombasa on Dec. 20, 2015. (AP Photo/Edwin Kana)

NAIROBI, Kenya -- No explosives have been found yet on the suspicious device that caused an Air France flight from Mauritius to Paris to be diverted to Mombasa, Kenya, a Kenyan police official said Sunday.

The device, found in a lavatory on the plane, looked like a cardboard box with a stop watch taped to it, said the official who is part of the investigation and who insisted on anonymity because he is not authorized to speak to the press. The CEO of Air France said the device discovered in the bathroom was a fake bomb.

Six passengers are being questioned over the incident, he said.

A passenger reported the device to the cabin crew who informed the pilots leading to an emergency landing at the Moi International Airport in Mombasa. One of those being interrogated is the man who reported the package.

"It requested an emergency landing when a device suspected to be an explosive was discovered in the lavatory," Owino said.

The plane was carrying 459 passengers and 14 crew members on board and had left Mauritius at 9 p.m., Owino said.

All passengers were safely evacuated and the device was taken out, said Owino.

"The object, believed to be an explosive device has successfully been retrieved from the aircraft," said Kenya Airports Authority in a post on Twitter, adding that scheduled flights to Mombasa were disrupted during the interval but that normal operations have resumed.

A passenger who spoke to journalists after leaving the plane in Mombasa described the emergency landing.

"The personnel of Air France was just great, they were just wonderful. So they keep everybody calm. We did not know what was happening," said Lucchini. "So we secured the seat belt to land in Mombasa because we thought it was a technical problem but actually it was not a technical problem. It was something in the toilet. Something wrong in the toilet, it could be a bomb."

The Indian Ocean island of Mauritius is a popular destination for French tourists.

France has been under a state of emergency since the Nov. 13 attacks in Paris that left 130 people dead. The Islamic State group has claimed responsibility for that and the Oct. 31 crash of a Russian passenger in the Sinai desert that killed all 224 people aboard. Moscow has said that the crash was caused by a bomb on the plane.

Two Air France flights from the U.S. to Paris were diverted on Nov. 18 after bomb threats were received. No bombs were found on the planes from Los Angeles and Washington, D.C.

Steven Ciaran, 30 an Irishman working on Reunion Island, said he was seated at back of the plane watching a movie when he noticed the rushed movement of cabin crew preparing emergency drills. Cabin crew told him it was a technical problem and they created a calm environment among the passengers.

"I was very distressed because I could see we were far from the destination," said Ciaran. He said passenger reassured each other.

"I thought the plane had difficulty and not that it had anything to do with terrorism," he said.

The plane arrived in Mombasa at around 1.30 a.m. and the passengers disembarked using an emergency slides, he said. A couple of people got twisted ankles but no one seriously injured, Ciaran said.