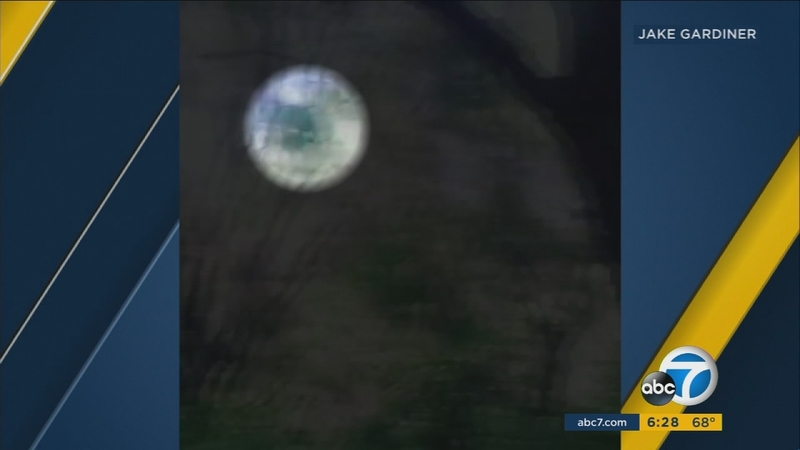 LA CRESCENTA, Calif. (KABC) -- In a blurry cellphone video, a mystery creature in a La Crescenta tree is causing quite a stir.

The creature, which resembles an ape, can be missed watching the video in real time, but when it's slowed down, the form is seen moving through the branches.

"You could definitely tell that it was some type of apelike creature. It got me a little bit nervous," Jake Gardiner said.

Gardiner is the guy who shot the video last week. At first, he didn't notice the strange movement in the trees high above him, but his mother did.

"It's a little startling, too, you know? Because you're not really expecting to see an ape up in the trees out there. You're looking for more like deer or mountain lions, stuff like that," he said.

As shocking as what it may be is also where the creature may be. The plot of land where the trees are is right off Lowell Avenue, just yards away from a YMCA.

The video has caught the attention of the California Department of Fish and Wildlife. Andrew Hughan, with the department, said the video is being investigated with help from Los Angeles animal control.

"It does look like an ape-something to me, but it's pretty hard to tell from a grainy cellphone video," he said.

Gardiner said he's been back to the scene a couple of times, trying to get another crack at the possible ape. But wildlife officials said that's a bad idea because if it is an ape, it won't be cute or cuddly.

He added if it does turn out to be a chimp, it most likely was someone's illegal pet that either escaped or was dumped. His advice is to stay away from the area and head to the zoo if you're looking for that kind of nature experience.
Report a correction or typo
Related topics:
la crescentalos angeles countyamazing videowild animalsanimalcellphone
Copyright © 2021 KABC-TV. All Rights Reserved.
TOP STORIES
LA County sheriff's deputy killed in off-duty Temple City crash
Start your holiday shopping extra-early this year, experts advise
Padilla bill would help some 'Dreamers' obtain citizenship
Video shows Gabby Petito's police encounter before disappearance
Convicted rapist denied bid for freedom after DA shifts position
Baby girl born to widow of Marine killed in Kabul bombing
CA to take in 5,200 Afghan evacuees, more than any other US state
Show More
Yamashiro hires first female executive chef in its 107-year history
Powerball ticket worth $2.5M sold at Compton liquor store
Video released in Tarzana hit-and-run that left skateboarder dead
Family mourns OC man killed in hit-and-run crash
Homeless veteran fatally stabbed at Brentwood encampment
More TOP STORIES News