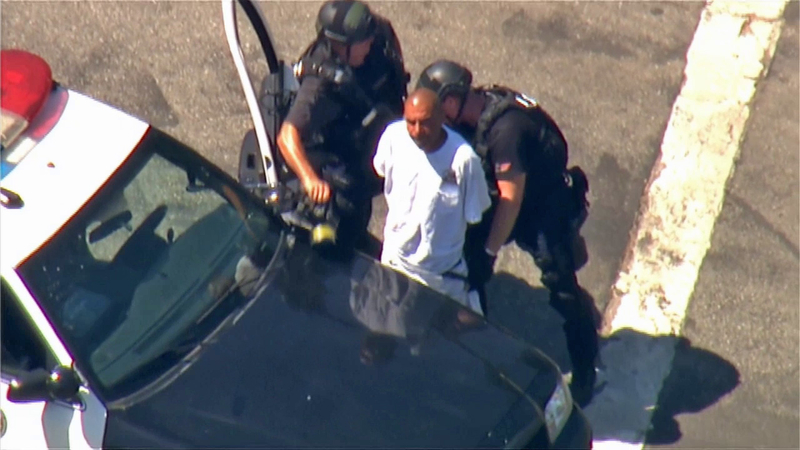 LOS ANGELES (KABC) -- An armed suspect was taken into custody Monday following a high-speed chase that led to a tense standoff in a North Hollywood neighborhood.

Police say officers had a warrant for the 41-year-old suspect, identified as Nolan Perez, for allegedly making criminal threats. He was spotted in the El Sereno area at about 10:15 a.m., but when officers tried to make contact, Perez fled in a red Nissan Altima.

During the chase, Perez is accused of pointing his weapon at police officers multiple times, LAPD Cmdr. Andrew Smith said.

The suspect exited the freeway at Magnolia Boulevard and immediately stopped his vehicle just outside Oakwood Secondary School. Perez then fled on foot with what appeared to be an assault rifle at about 11:30 a.m., sparking what resulted in a nearly four-hour barricade situation in North Hollywood.

James Brandt had exited the 170 Freeway moments before and was waiting at a red light when he saw the armed suspect. 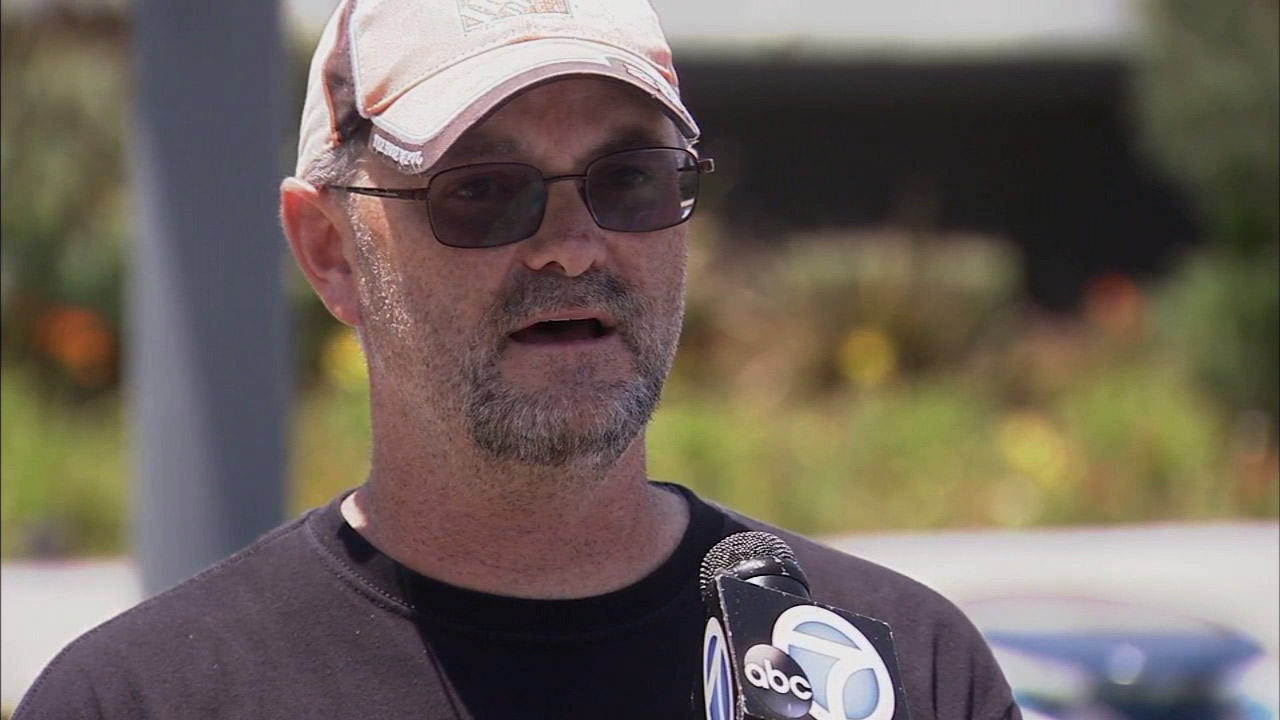 Witness describes seeing armed chase suspect
A witness described seeing an armed suspect run into a North Hollywood neighborhood at the end of a police chase.
"When I turned around, I saw him fumbling in the car and came out with a rifle, and that's when I ducked, and when I looked back up, the LAPD pulled in front of me. Then I saw him running down the street with the rifle," he said. 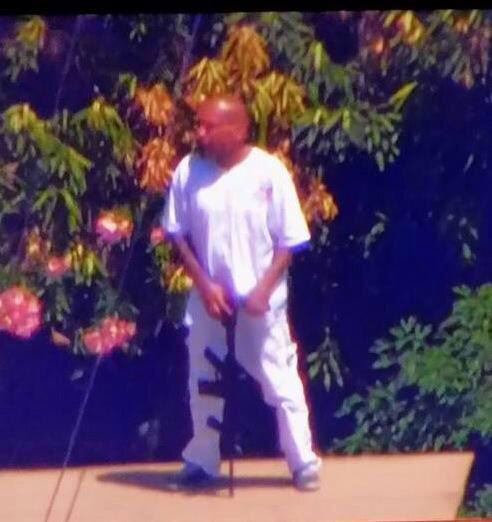 A chase suspect stands on a rooftop in a North Hollywood neighborhood on Monday, June 9, 2014, in this photo taken by a viewer.

Perez ran westbound down Magnolia and turned into a neighborhood, where he appeared to hide in the backyard of a home on the 11500 block of Hartsook Street. At one point, he climbed onto a rooftop, where he stayed for about five minutes before climbing back down and barricading himself inside a home.

Residents in the area were urged to stay inside, several streets were closed and nearby schools were placed on lockdown. Children at Oakwood Secondary School were led out in groups to be reunited with their parents at North Hollywood Park.

Parents wait at a North Hollywood park to pick up their children, who were evacuated from Oakwood Secondary School after a suspect ran into the neighborhood on June 9, 2014.

At about 3 p.m., police fired tear gas canisters into the home where the suspect was holed up. A few minutes later, Perez came out -- unarmed -- to surrender peacefully and dropped face-down on the ground. SWAT officers moved in and took Perez into custody without further incident. No injuries were reported.

The LAPD said they recovered what appeared to be an AR-15 assault rifle inside the home. Police were investigating whether Perez fired any rounds at officers during the pursuit, and were searching the 170 Freeway for bullet casings.

PHOTOS: Chase suspect holes up in NoHo home
A chase suspect abandoned his vehicle and fled into a North Hollywood neighborhood on Monday. See photos.

Nolan Perez was charged earlier Monday with one count of stalking and six counts of making criminal threats, according to the Los Angeles District Attorney's Office.

According to court papers, Perez allegedly made repeated threats against a woman at an El Sereno home between May 19 and June 6. His relationship with the woman was not immediately known.

Neighbors at the Pacoima home of his parents, Luis and Aurora Perez, said Nolan Perez had moved in recently after living with his girlfriend. One man said he was not surprised by Perez's alleged actions and arrest, saying he was "a troublemaker" and that he frequently had problems with the neighbors.

Another man, who said he worked with Perez as a painter, said the 41-year-old was "suffering from emotional issues." 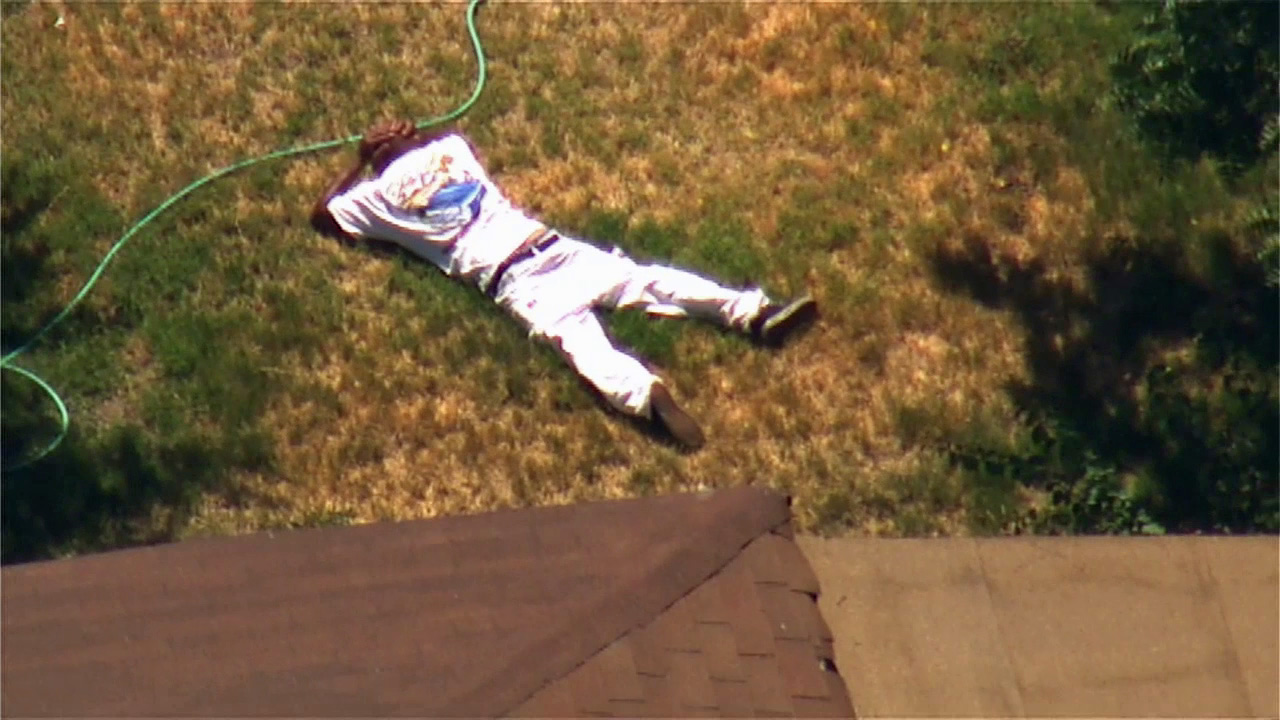 Nolan Perez's parents, Luis and Aurora Perez, were with officers when he was arrested Monday afternoon following the pursuit and standoff.