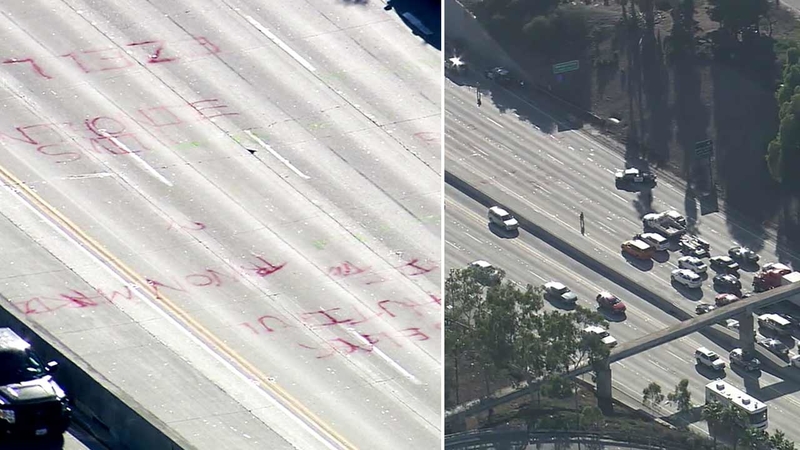 The protest began shortly before 2 p.m. when nine people in three vehicles stopped near Century Boulevard and Manchester Avenue and blocked traffic by exiting their cars and spray paintings slogans on the road, the California Highway Patrol said.

The demonstrators scrawled on the freeway the names of African-American victims killed by law enforcement in recent years.

Spokesperson for the group Pete White said the disruption was was meant to remind the public of an ongoing issue.

"We would hope that your 20 to 30 minutes could be spent thinking about the crisis facing the black community," he said.

The demonstration was planned by Black Lives Matter Los Angeles for 12 p.m. near the Century Boulevard exit, according to a statement released by the group.

The statement read in part: "On one of the busiest travel days of the year, Black Lives Matter is calling for a halt on Christmas as usual in memorial of all of the loved ones we have lost and continue to lose this year to law enforcement violence without justice or recourse."

White said the group wants Los Angeles Police Chief Charlie Beck to be fired, the L.A. police commission to meetings to be moved to evenings so more people can attend, and is demanding the L.A. City Council to award reparations for victims of police brutality.

Protests by Black Lives Matter groups in places nationwide also took place, including the Minneapolis Mall of America and others were expected in San Francisco and New York.