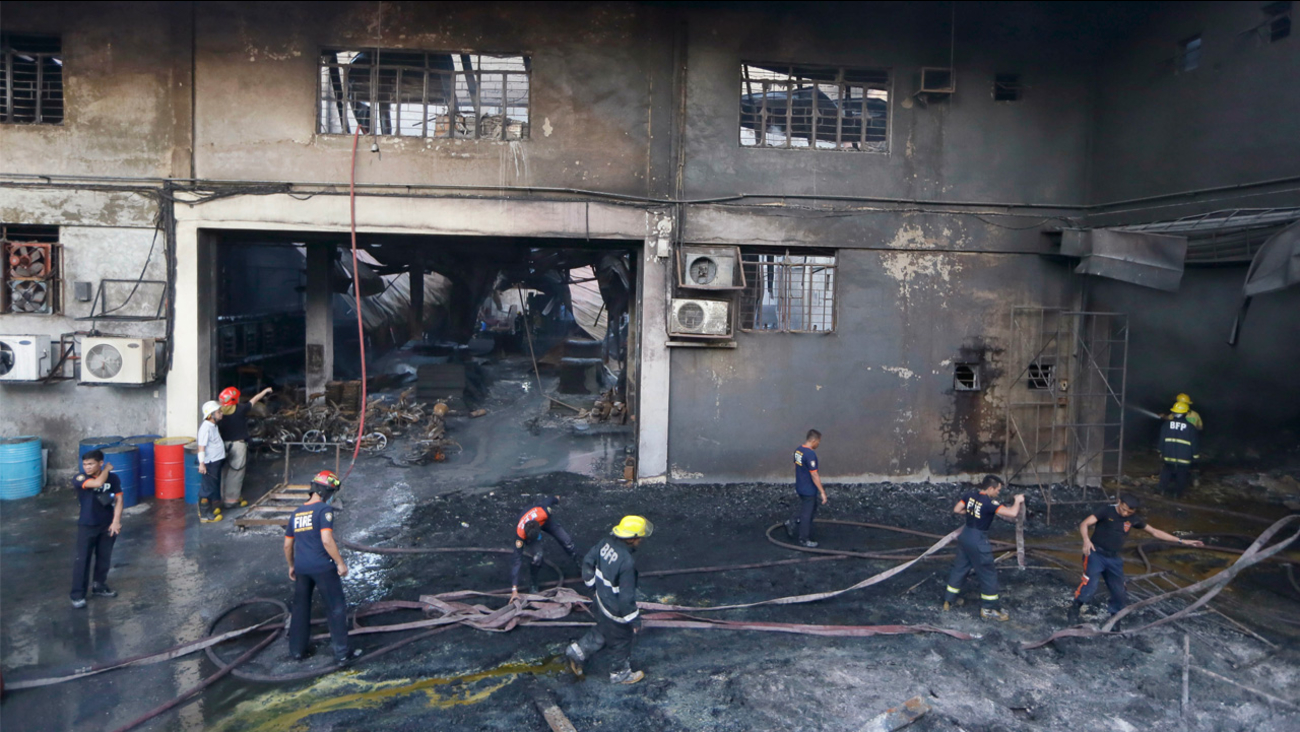 Firemen work to put the fire under control at a still-smoldering Kentex rubber slipper factory in Valenzuela city, a suburb of Manila, Philippines, Wednesday, May 13, 2015. (Bullit Marquez)

AP
MANILA, Philippines -- The death toll in a rubber slipper factory fire in a suburb of the Philippine capital climbed to at least 45 on Thursday with another 26 people still missing in the gutted building and feared dead, a local mayor said.

The toll was expected to rise as police recover more bodies from inside the Kentex Manufacturing Corp. factory. Mayor Rex Gatchalian of Valenzuela city north of Manila said a search for bodies restarted Thursday after it was suspended late Wednesday because of the heat and worries about the instability of the two-story building.

He said at least 30 people had been injured and expressed hope that some of the missing may have escaped.

"The city government is still praying and hoping that the 26, some of them, must have gotten out earlier in the morning and had gone to relatives and have not logged on at city hall. So we are still hoping that the number 26 will still go down," he said.

Dionesio Candido, whose daughter, granddaughter, sister-in-law and niece were among the missing, said iron grills reinforced with fencing wire covered windows on the second floor that "could prevent even cats from escaping."

He said he was allowed by authorities to enter the gutted building, where he saw charred remains "piled on top of each other" but could not say how many.

District Fire Marshal Wilberto Rico Neil Kwan Tiu said he was among the first to reach the second floor of the gutted building after the fire and saw "numerous bodies" but could not immediately say how many.

Local media reports quoted relatives as saying their kin sent text messages saying they were on the second floor, but contact was lost shortly after.

Gatchalian said the fire was apparently ignited by sparks from welding work being done at the factory's main entrance door, triggering an explosion of the chemicals used to make the slippers.

Workers fled to the second floor where they were trapped, he said. He was unsure if there were any fire escapes there.

Tiu, the fire marshal, said the building had other exits but apparently the workers were overwhelmed by the thick black smoke from the burning rubber and chemicals, which are highly flammable and caused the blaze to spread quickly.
Related topics:
fireu.s. & world
Copyright © 2020 by The Associated Press. All Rights Reserved.
More Videos
From CNN Newsource affiliates
TOP STORIES