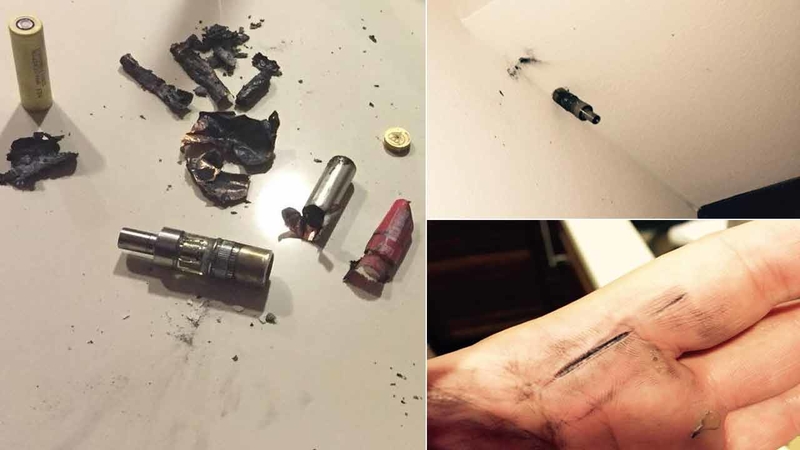 E-cigarette lodges into ceiling after exploding in OC man's hands

SANTA ANA, Calif. -- A Santa Ana man was smoking an e-cigarette in his bedroom, when the device exploded in his hands and lodged in the ceiling.

The 29-year-old man, who only wanted to be identified as Chris, said he was sitting on his bed and smoking around 1:45 a.m. Monday when his modified e-cigarette began to hum.

He pulled the device away from his mouth, and it exploded. The blast was so severe, half of the e-cigarette became lodged in the ceiling. The rest of the device was left charred and in pieces.

Sheets and clothing on his bed caught fire, but he doused it with water and called 911.

Caller: I'm freaking out, I just had an electronic cigarette blow up in my hand.
Operator: Are you burned or what happened?
Caller: I'm burned pretty bad, I'm freaking out.
Operator: Are you having any trouble with your breathing?
Caller: I think I'm having a little bit of anxiety. This thing like blew up in my face and it shot and stuck in my ceiling.

Chris was taken to an area hospital with minor burns to his face and hands and a cut to his hand. He told Eyewitness News that he's done smoking and wants to caution others about using these modified e-cigarettes.

"Swapped out a battery, went to throw a new battery on, I was getting ready to go to sleep, took one drag. As I was taking a second drag, it made a noise. Within a couple seconds of it making a noise, I pulled it away from my lips and that's when it exploded," Chris described.

There was no word on the exact cause of the explosion. The Orange County Fire Authority is investigating the incident. Authorities say they have seen many such incidents recently. Officials say some of the explosions are caused by over-charged lithium batteries inside the devices.