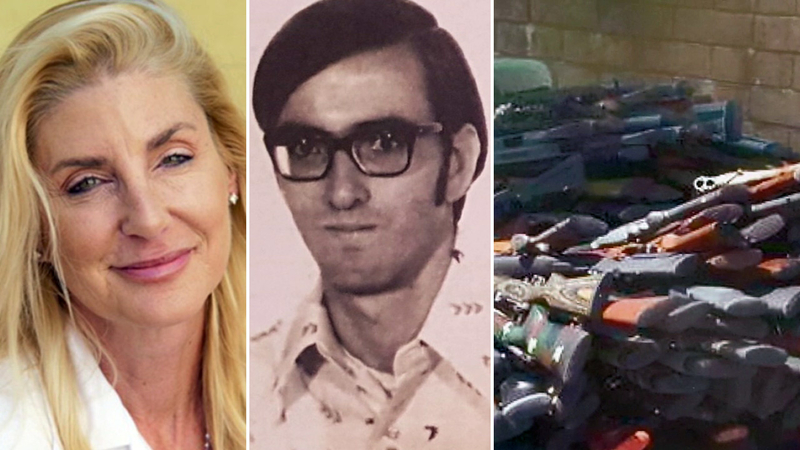 PACIFIC PALISADES, LOS ANGELES (KABC) -- The saga of the late Jeffrey Lash unfolded like a psychological thriller spurring a debate over gun control.

According to his ex-fiancee, Lash was a hoarder of weapons and a conman.

Over the course of 17 years, he bought so many firearms, they were stacked to the ceiling of Catherine Nebron's Pacific Palisades townhouse.

Nebron said Lash forced her to live in a downstairs bathroom and convinced her he was an ultra-secret agent.

"He had worked for an intelligence agency, now he was on his own, he was independent," Nebron said.

Nebron alleged Lash manipulated her with stories about his power.

In court documents, she said Lash stated he thwarted two-thirds of the bomb and terrorist threats in the U.S. after the Sept. 11 attacks, stating they were incidents the public didn't know about.

Nebron said he dropped names like Ronald and Nancy Reagan, the Bushes, and Condoleezza Rice.

She said Lash would hit her, reduced her to a robot, and convinced her and other women to bankroll his cash purchases for firearms and more than a dozen vehicles.

Nebron said it was all in the name of national security.

"We didn't want people to die or cities to explode. It was very real for us. We thought we were doing a good thing," Nebron said.

Yet, estranged cousins of Lash claim they are the rightful heirs to his estate and they aimed to take action to send a message to lawmakers.

They want the 891 guns and 8 tons of ammunition dumped into the ocean or melted down.

"We want them destroyed rather than have them returned back into commerce, gun dealers, auctions gun shows," their lawyer Daniel Brookman said.

According to Brookman, Lash's stockpile was worth an estimated $5 million.

A year after an autopsy said Lash died at 60 years old from natural causes, Los Angeles police said he legally purchased the firearms.

Nebron's lawyer claims now they were hers to sell.

"They can be sold through the Department of Justice and may be sold to police departments, but there is no point in destroying them," Nebron's lawyer Harland Braun said.

Lash's stockpile never raised a red flag, according to Nebron.

"People saw them but not really. Again, it was the way this man spoke. He was so good at what he did," says Nebron.