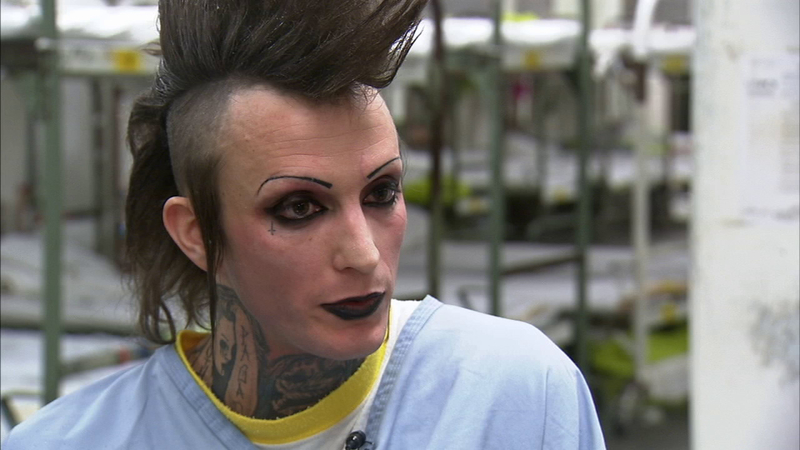 LOS ANGELES (KABC) -- Erika Anderson, a 33-year-old transgender woman, is one of 400 members of the K6G wing at the Los Angeles County Men's Central Jail, a wing specifically for the gay and transgender community.

The inmates in this jail are non-violent offenders, and many of them are in jail because of drug addiction.

Life in the general population can be dangerous, even deadly for gay and transgender inmates.

"There's a lot of people that go to extreme measures just to get at homosexuals or transgenders," Anderson said.

A glimpse of life in a general population surveillance video shows an inmate escaping from his cell and attacking a handcuffed inmate, stabbing him with a homemade knife.

Every day is a matter of life or death and for some, like Anderson, even taking a shower can be frightening.

"I had breast implants so it's painstaking at times because I don't always like to be looked at," she said. "I still have to worry about certain situations like that, you know, people are going to be animalistic anyways."

Erika is a perfect example of why the jail has a special wing. It is a place where these prisoners are safe, but can also get help. The inmates are offered a variety of special classes that help them deal with drug addiction or help them get an education. Two-thirds of the inmates take part in the classes.

"I love the fact that people of this jail see the value of changing your life instead of just accepting that everyone is bad," said inmate Dino Baglioni.

But even in the wing, complications arise. Because the inmates are locked up together, relationships can develop. Even though sex is technically against the law, a controversial program makes condoms available to the inmates to prevent the spread of disease.

In one of the rooms in the wing, 160 people live together in a cramped space with bunk beds stacked on top of one another. The inmates also share a bathroom with the toilets out in the open, removing any sense of privacy.

Still for some, the imprisonment provides an opportunity to turn their lives around.

"I have all these tattoos and I have this crazy look and I'm a transgender so all of that together...I can't get a job and it's been so painstaking," Anderson said. "You know, it's rough out there and that's why I say it's easier to come in here. Now I have a direction. I don't have to worry about what I'm going to do when I get out. I have a goal."
Report a correction or typo
Related topics:
societygaycrimelgbtqtransgenderlgbtq pridedrug addictionlos angeleslgbt
Copyright © 2021 KABC-TV. All Rights Reserved.
More Videos
From CNN Newsource affiliates
TOP STORIES