KABC
By Amy Powell and ABC7.com staff
HOLLYWOOD, LOS ANGELES (KABC) -- A suspect died after being shot by police at the corner of Hollywood and Highland on Friday night.

The shooting happened after LAPD officers were called to the area around 6:45 p.m., responding to a report that someone had been stabbed.

"The officers arrived in the area of Hollywood and Highland when they observed a man in the intersection. The male was armed with a knife. When he saw the officers, he approached them, and an officer-involved shooting occurred," said LAPD Det. Meghan Aguilar.

The LAPD tweeted out a photo of the knife believed to belong to the suspect. 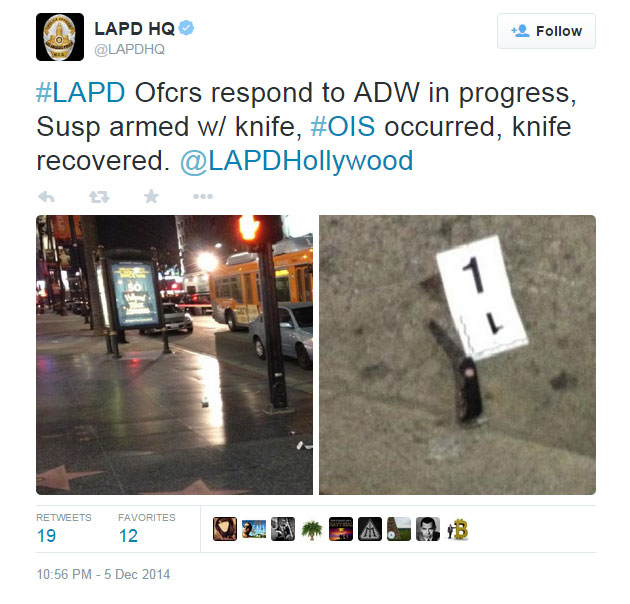 A Tweet from LAPD after police shot and killed a man they say was armed with a knife, seen right, on Friday, Dec. 5, 2014.

The unidentified man was pronounced dead after being transported to a hospital. Investigators said the knife was found on the street near the suspect.

A witness driving by the incident at the time told Eyewitness News she heard officers with guns drawn yelling, "He's still got a knife."

Witness Jordan White had just walked out of the subway station and was standing a few feet away when he heard the shots.

"All I heard is just a bunch of gunshots, it sounded like a rifle. I thought I was about to get caught up in a shootout. Everyone was scattered. And then I realized there were police. They were posted up over a man that was lying on the ground bleeding," said White.

"I believe there were three officers with guns drawn and we heard a number of gunshots happening," said witness Henry Hodge. "It's just kind of a shock factor really. You don't really know what to think. It just doesn't really hit you," said Hodge.

The area of Hollywood and Highland remained closed off to traffic in the 11 p.m. hour. Businesses stayed open.