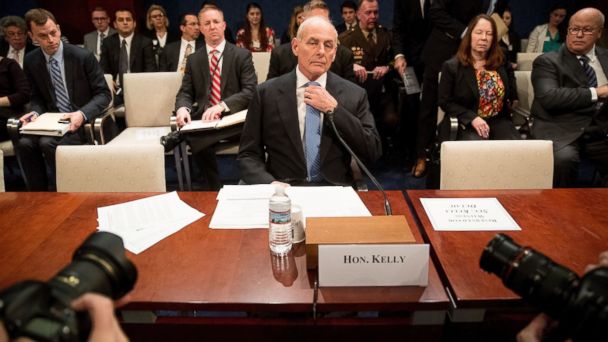 In his first appearance before Congress as secretary of Homeland Security, John Kelly called President Trump's executive order on immigration "lawful and constitutional" but said he should have delayed the order's rollout "just a bit" so that members of Congress could be prepared.

"The thinking was to get it out quick so that potentially people that might be coming here to harm us would not take advantage of some period of time that they could jump on an airplane and get here," Kelly said.

He argued that the order, which blocks travelers from seven Muslim-majority nations from entering the country, "will prevail [in court] and be able to take the steps necessary to protect our nation."

Kelly repeatedly disputed that the executive order is a Muslim ban, insisting it's just a "pause" based on security concerns.

He said five of the seven countries named in the order are "nearly failed states" and four of them don't have U.S. embassies.

"So I'm at a total loss to understand how we can vet people from various countries when in at least four of those countries we don't even have an embassies," he said.

Earlier in the hearing, Rep. Bennie Thompson, D-Miss., asked Kelly to provide information on any "bad people" who have been let into the U.S. since a court halted the executive order.

"Let's just say, for instance, a person who is trying to get to the United States to do some harm, some terrorist attack, is coming in during this period that the courts put a stay on our enforcement. We won't know that until an individual who's a bad person, until they do something bad," Kelly said. "But it's entirely possible that someone that's coming in, whether it's during this stay court action or previous to this, they intend to do us harm."

"But you don't have any proof at this point?" Thompson followed up.

"Not until the boom," Kelly said.

When asked to clarify, Kelly responded, "Not until they act to blow something up or go into a mall and kill people."